So he renounces his citizenship to avoid to pay U.S. taxes.  He's a creep and should be held accountable.  Start the boycott of Facebook now. 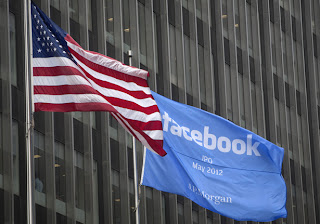 Article by Hogue at The Nation
When it was revealed last week that Facebook co-founder Eduardo Saverin renounced his US citizenship, even notorious bad-boy billionaire Mark Cuban took to Twitter to express his disgust. The move allows the 30-year old Saverin to avoid paying a significant chunk of the taxes he will owe on the windfall coming his way with the impending Facebook IPO. In making this decision, the Brazilian native did more than expose his blind disregard for all that his adopted country has done for him. He has made himself the poster child for the callous class of 1 percenters who are all too happy to use national resources to enrich themselves, and then skate, or cry foul, when asked to pay their fair share. The story evokes the image of the marauding aliens from the movie Independence Day, who come to Earth to take what they can get before moving on to another planet.
Saverin, who stands to make billions from his 4 percent share in Facebook, hastily moved here at the age of 13 when his name turned up on a list of potential kidnap victims targeted by criminal gangs in Brazil. His father was a wealthy businessman, with a high profile in their home country, and so his family relocated to Miami to protect the youngster. Eduardo thrived in his new country, eventually attending Harvard University, where he had a stroke of life-changing luck when he was assigned future Facebook CEO Mark Zuckerberg as a roommate. Their subsequent struggle over the company has been immortalized in the blockbuster Academy Award–winning film, The Social Network, which portrayed Eduardo as an outsider within the close-knit circle of friends, who eventually only won his stake in the company through a lawsuit based on an early investment in the company.
READ THE REST