DISSIDENT CHEN HEADING FOR THE U.S.

He Could Not Fly Back with Hillary
By Victor M Adamus 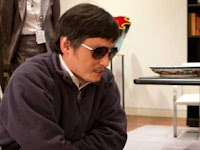 I have to hand it to Hillary Clinton.  She has the most cumbersome of jobs as Secretary of State.  Imagine all she had on her mind going to China last week only to be confronted by a blind dissident who made his way to the American Embassy, seeking asylum, just prior to her leaving the U.S.  Needless to say, it was a distraction from her planned itinerary.


A diplomatic storm gathered around Chen Guangcheng for the entire time Clinton was in China.  Chen was hospitalized during the visit and U.S. Embassy officials were not allowed to be present.  Rumors spread by twitter that the Beiging hospital said he was “severely beaten by police while there and is under constant surveillance”.  His only contact with Clinton had been by phone.


The past two decades China has acted more like an industrial nation than a communist one as they turned to capitalism to run massive manufacturing plants employing millions of Chinese.  But it was the Communist Party that took offense to the dissident asking to leave China, with Clinton, to study law in the United States.


His six day stay at the American Embassy put his family in danger and he tried to negotiate a fast process of paperwork so he and his family could leave with Clinton.  But that was not possible.  According to Vice President Joe Biden he was offered a seat at the law school at New York University.


Chen had been under house arrest since 2010 for his efforts to challenge forced abortions by the State.  China only allows married couples to have one child.  His escape to the Embassy was an embarrassment to China’s vast security operations which has a larger budget than the military.


U.S. Diplomats report Chen is in the system and believe that a ruling to permit him to travel to the U.S. on a student Visa with his family could come within the next ten days.