Trying to tell the rest of the country how to think… 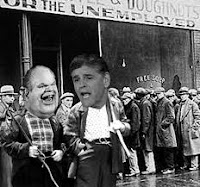 Rush Limbaugh and Sean Hannity are set to be dropped from the second-biggest radio network in the country, Politico recently reported.

Cumulus, which runs about 40 stations across the country, is prepared to part ways with the broadcasters over the high cost of distributing their shows, the report said. Limbaugh and Hannity--who are the top two most highly-rated talk show hosts in America--are syndicated by Premiere, which is owned by Cumulus rival Clear Channel. If the plan comes to fruition, it would mark the culmination of a series of escalating skirmishes between the company and the broadcasters--especially Limbaugh.

In May, the New York Daily News reported that Limbaugh was set to leave Cumulus himself, after CEO Lew Dickey repeatedly accused him of contributing to the company's financial losses due to his incendiary remarks about Sandra Fluke. Dickey stuck to this line in an earnings call days later, saying that the "facts [were] indisputable."

A Cumulus executive told the Radio Ink website that the vast majority of the country's top network advertisers had orders to exclude Limbaugh and Hannity from their ad buys. (Premiere heatedly disputed this.) Taken together, a portrait emerges of a company signalling that it fears no major financial impact if it were to cut its ties with the two men.

It's possible that Limbaugh and Hannity would be immediately picked up by Clear Channel stations in the markets where they were dropped. But Deadline noted that Dickey has already seemingly prepared his response to that move, telling Bloomberg TV in May that "we have the premier talk distribution platform in the business and if you want to be on a big stage in this game, you need to be on our stations in the largest markets. They're the biggest signals, the heritage brands and everybody knows that."

BUT, Rush does not know when to keep his mouth shut…

It is his new opinion that New York mayoral candidate Anthony Weiner's wife, Huma Abedin, is was seemingly unable to stop her husband's high-profile philandering.

According to the conservative lightning rod, Abedin lets her husband get away with almost anything because she is a Muslim, and therefore powerless in the interfaith couple's marriage.

In a nationally televised press conference earlier this week, Abedin stood by her husband literally and figuratively as he answered questions about new revelations in his online sex scandal. This led to much speculation about Abedin -- not all of it positive.

"It's relevant to point out here by the way ... Huma is a Muslim,” Limbaugh said, according to Mediaite. “In that regard, Weiner ought to be able to get away with anything.”

“Muslim women don’t have any power, right?” he continued. “Muslim women are beheaded, stoned, whatever, if they drive, have affairs. In certain countries, Muslim women, if they’re raped, are killed -- it’s their fault."
at 2:00 PM