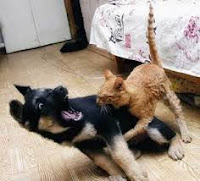 While many of us have never been assaulted where we currently live and never will, there are others all over the world who have and are apprehensive to venture outside their homes again; but, there are also those who are tired of this bullying and are fighting back.

Police say a Beaver County woman may have thwarted a robbery, by running over a suspect with her car.  Aliquippa police say a witness saw a man walking down a street carrying what appeared to be a sawed off shotgun.

She called police, but noticed that the man was heading in the direction of a group of children.  Police say she feared White was going to shoot the children, so she ran over him with her car.

White was taken to the hospital with non-life threatening injuries. Police believe he was actually going to rob the Circle K mini-mart down the road and that she may have prevented the robbery.


They say White was carrying an airsoft pellet gun which had been sawed off to look like a shotgun, and the orange tip had been taken off.

The Beaver County District Attorney says they are not going to charge her with running White over.

Community members in one Detroit neighborhood took matters into their own hands and beat an accused rapist of a 15-year-old girl with Down Syndrome after they say Detroit Police failed to respond.

The suspect lives in the same neighborhood as the victim. Members of the Hubbard Farms community say the man has mental health issues. They posted his face on flyers around the neighborhood to warn others.

Family friend of the victim, says the teen waited for seven hours at the hospital for Detroit Police to administer a rape kit. She reportedly waited five days before police interviewed her about the sexual assault and 21 days until Detroit Police sent the rape kit to the Michigan State Police Crime Lab.

Other community members were equally outraged at what they believed was a lack of response by Detroit Police and on Monday took matters into their own hands. The community beat the accused rapist with a baseball bat so badly he needed to go to the hospital.

Paint this author with the colors of civil disobedience but I take my hat off to all of those who have or will fight back with criminals.
at 2:00 PM

Email ThisBlogThis!Share to TwitterShare to FacebookShare to Pinterest
Labels: Crime