From Russia With Love

The Soviet Central Government created the Wrangel Island Nature Reserve in 1976 to protect the colonies of snow geese, polar bears, and walrus that flourish here.

This reserve is now one of Russia's most treasured wildlife sanctuaries. The small village of Ushakovskoe on Wrangel Island is home to approximately 100 Eastern Siberian Yupik and Chukchi people and serves as a base camp for up to 30 seasonal reserve staff.

These rangers work from field stations dotted around the islands during spring, summer and autumn. In winter just a few rangers remain to attend to camp maintenance.  Only official personnel and invited guests are allowed access to the reserve, protecting the unique and untainted ecosystem.

It is believed that Wrangel Island is the last place on earth where woolly mammoths roamed. Evidence has been found of human occupation as early as 1700 BC, with some stone and ivory tools discovered in 1975. The Chukchi people of Siberia tell of a chief who led his people across the ice to settle the island. Whether this legend is true or not, there is evidence that hunters followed the reindeer herds north on their annual migration. 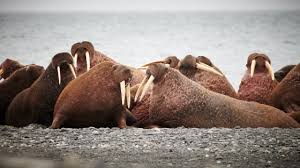 Cossack records in 1764 note the sighting of the island, which they named Tikegen Land. Eventually the name if the island was changed to honor Baron Ferdinand von Wrangel who unsuccessfully tried to locate the island after reading of this sighting.

The first recorded landing on Wrangel Island was by a German whaler in 1866. Subsequently there were visits by whalers and Arctic explorers until in 1881 when a party from the USRC Corwin landed and claimed it for the United States, naming it 'New Columbia'. Ultimately the Tsarist government declared Wrangel belonged to the Russian empire in 1916. This proclamation was ratified in 1926 by the Soviet Union.

In the 1930s the appointed governor of the island, Konstantin Semenchuk, ruled by extortion. He forbade the people to hunt walrus, putting them in danger of starvation and was implicated in the mysterious deaths of his rivals. He was finally brought to justice and sentenced to death for "banditry" and violation of Soviet law.

In 1976 it was decided to declare Wrangel Island, neighboring Herald Island and the surrounding waters to 5 nautical miles a state Nature Reserve for the purpose of preserving the unique ecosystem.

The nautical limit has since been extended to 24 miles and a captive reindeer farm which was established in an attempt to generate income for island residents has been closed. A military radar installation at Cape Hawaii on the southeast coast was closed in 1992 and only the settlement of Ushakivskoe remains occupied on the island. 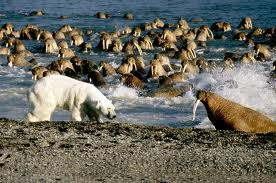 In 2004 the Nature Reserve was added to UNESCO's World Heritage List.
at 2:00 PM