Where is Jimmy Hoffa? 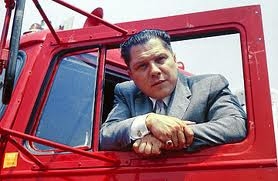 Hoffa was closely involved with the International Brotherhood of Teamsters (IBT) union, as an organizer, from 1932 to 1975. By 1952, Hoffa had risen to national vice-president of the IBT, and served as the union's General President between 1958 and 1971. He secured the first national agreement for teamsters' rates in 1964, and played a major role in the growth and development of the union, which eventually became the largest single union in the United States, with over 1.5 million members at certain times, during his terms as its leader.

Hoffa became involved with organized crime from the early years of his Teamsters work, and this connection continued until his disappearance in 1975. He was convicted of jury tampering, attempted bribery, and fraud in 1964. Hoffa was imprisoned in 1967, and sentenced to 13 years, after exhausting the appeal process. In mid-1971 he resigned the Teamsters' presidency, an action that was part of a pardon agreement with President Richard Nixon, to facilitate his release later that year.

Nixon blocked Hoffa from union activities until 1980 (which would have been the end of his prison term, had he served the full sentence). Hoffa attempted to overturn this order and to regain support.
Hoffa was last seen in late July 1975, outside the Machus Red Fox, a suburban Detroit restaurant.  His disappearance gave rise to many theories as to what happened to him and where his body was hidden.

DNAinfo reports that Hoffa was "garroted by Anthony 'Tony Pro' Provenzano, a notorious New York mobster" in Inkster, Mich., and fed into a wood chipper.

The story comes just days after the FBI called off a search for Hoffa's body underneath "a concrete slab in a barn in Oakland Township, Mich.," according to the Associated Press.

"We did not uncover any evidence relevant to the investigation on James Hoffa," Robert Foley, head of the FBI in Detroit, said. "I am very confident of our result here after two-days-plus of diligent effort. As of this point, we'll be closing down the excavation operation."