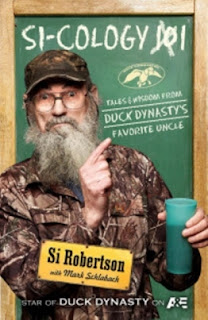 Even though Si appears to be someone who could never run out of anecdotal stories – regardless of how exaggerated they might be...

"I was in the military, so I told my wife that I was never there for the kids when they were growing up. And she said, 'oh yeah you were. Let me go get a photo album.' And she was showing me dressed as a bunny rabbit, rooster, and Santa Claus during Christmas time. Personally, I didn't feel that I was there enough," Si commented.

In his book, Si shares a spattering of stories about his childhood – skipping school to go fishing with his older brothers – and how he managed to earn A's at Louisiana Tech after he skipped most of his classes during an entire semester.

Si's mastery of storytelling runs throughout his descriptions of the Vietnam War and how he met his wife, Christine. The always-jovial Uncle Si also speaks candidly about the difficulties he and Christine have faced, and how God has blessed and sustained them throughout their 43 years of marriage.

He also shares their unexpected blessing of having two children, Trasa and Scott, and eight grandchildren.

"I was at an event in Arkansas, and a woman walked up and was standing there, and I was waiting for her to hand me something to sign – a T-shirt, a hat or whatever. And she said, 'well, I'm ready.' And I looked up and I said, ready for what? 'Ready to marry you. I drove 450 miles here just to marry you.' I told her we've got a slight problem here, lady.

And she said, 'what's that?' I'm already married and my wife probably wouldn't like me marrying you. 'You mean I drove 450 miles for nothing?' I said, no. Isn't that a T-shirt you've got hanging over your shoulder. 'Yeah.' Well, I'll sign it for you darlin' that's the best I can do for you," he said.

According to Si, marriage is a union between two imperfect people who are destined to make mistakes. But at the end of the day, their love for each other and faith in Jesus Christ will bring them through every hardship and enrich the most joyous times of their lives.

"People have got to understand that you've got to learn to laugh at yourself when you make a mistake," Si advised. "Don't get mad and fly off the handle, OK. We're all human, and we make mistakes."

"What I tell young couples that are getting married is: you're going to have quarrels, and on some things, you're just going to have to agree to disagree. And when you go to bed at night, kiss each other and tell each other that you love each other. Don't go to bed mad. Life is too short. Keep it simple."
Read more: