Growth Has A Price 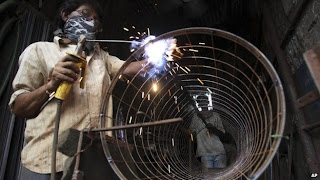 The Indian government has approved infrastructure projects worth 1.83tn rupees ($28.4bn; £17.7bn) to revive the economy and boost the falling rupee.

"The message we are sending is that the investment cycle has restarted, and we are pushing it," he said.
The announcement came on a day the rupee hit a new record low, touching 65.6 against the US dollar.
Recent attempts to reduce volatility in currency markets have so far failed to have any result.

The finance minister told reporters on Tuesday that the rupee had "overshot its true level", but said that India was not the only country facing problems.

"As I said in parliament, every emerging market is challenged today. So India is also challenged, and the impact is felt both on the equity market as well as the currency market," news agency Reuters quoted him as saying.

"I think we'll simply have to be patient, be firm, do whatever is required to be done, and the rupee will find its appropriate level.

"What I said a few days ago, I still maintain it. The rupee has overshot its true level, it's undervalued.