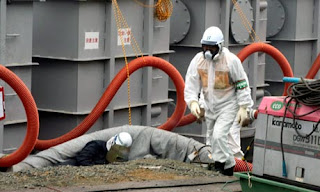 Radiation levels 18 times higher than previously reported have been found near a water storage tank at the Fukushima Daiichi nuclear power plant, causing fresh concern about the safety of the wrecked facility.

The plant's operator, Tokyo Electric Power (Tepco), said radiation near the bottom of the tank measured 1,800 millisieverts an hour – high enough to kill an exposed person in four hours. Tepco said water levels inside the tank had not changed, indicating there had not been a leak. But the company said it had yet to discover the cause of the radiation spike.

Last month Tepco said another storage tank – of the same design as the container causing concern at the weekend – had leaked 300 tonnes of radioactive water, possibly into the sea.

Japan's nuclear watchdog confirmed last week it had raised the severity of that leak from level 1, an "anomaly", to level 3, a "serious incident", on an eight-point scale used by the International Atomic Energy Agency for radiological releases.

Earlier, the utility belatedly confirmed reports that a toxic mixture of groundwater and water being used to cool melted fuel lying deep inside the damaged reactors was seeping into the sea at a rate of about 300 tonnes a day.

Experts said those leaks, which are separate from the most recent incidents, may have started soon after the plant was struck by a powerful tsunami on 11 March 2011.

The tsunami smashed into the plant after Japan's north-east coast was rocked by a magnitude 9.0 earthquake. The waves killed almost 19,000 people, while the resulting triple meltdown at Fukushima Daiichi forced 160,000 people to abandon their homes.

"We cannot fully stop contaminated water leaks right away. That's the reality. The water is still leaking in to the sea, and we should better assess its environmental impact."  Read more: