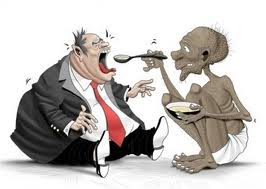 WASHINGTON >>> More than one-third of the nation's highest-paid CEOs from the past two decades led companies that were subsidized by American taxpayers, according to a report released Wednesday by the Institute for Policy Studies, a liberal think tank.

"Financial bailouts offer just one example of how a significant number of America's CEO pay leaders owe much of their good fortune to America's taxpayers," reads the report. "Government contracts offer another."

IPS has been publishing annual reports on executive compensation since 1993, tracking the 25 highest-paid CEOs each year and analyzing trends in payouts. Of the 500 total company listings, 103 were banks that received government bailouts under the Troubled Asset Relief Program, while another 62 were among the nation's most prolific government contractors.

Many of the companies appeared multiple times on the annual top 25 list, with Bank of America appearing 18 times, Citigroup appearing 15 times, while Morgan Stanley and American Express each secured 12 slots. JPMorgan Chase CEO Jamie Dimon has landed on the list twice since the bank received $10 billion under TARP, and American Express CEO Kenneth Chenault has appeared three times since his company accepted $3.4 billion in bailout money.

Goldman Sachs received $10 billion under TARP, and made the list seven times in the past two decades, once after receiving its bailout. Washington Mutual and Lehman Brothers, both of which failed in 2008, also appeared on the list, with Leman making eight appearances before filing for bankruptcy.

Banks piled on financial risk in the years leading up to the banking crash, fueling record profits from their investments. Those high profits translated into strong "performance-based" bonuses and stock compensation. But when the risk backfired in 2008, companies either collapsed or were rescued by taxpayers.  Read more: