Bill O’Reilly (below) says God told him to write his new book, “Killing Jesus: A History.”

The Fox News anchor explains in an interview on CBS’ “60 Minutes” that one night he awoke with the title of the book in his head. He says he believes he got that message from the Holy Spirit.

Mr. O’Reilly says the book is a researched, historic account. Despite its de-emphasis of religion, he is using his special gifts from God in a positive way.

He says it’s all part of God’s plan for him. 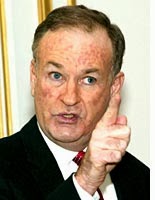 O’Reilly grew up on Long Island, got a BA (in history, of course) from Marist College, a Master's Degree in Broadcast Journalism from Boston University, and a second MA in Public Administration from The Kennedy School of Government at Harvard. In addition to studying history, Bill taught it in high school before going into broadcasting, and he's been a long time serious collector of historical documents.

O’Reilly supports Jessica’s Law, which is named in memory of Jessica Lunsford, who was abducted and sexually assaulted before being brutally murdered, "Jessica's Law" refers to the Jessica Lunsford Act passed in Florida which mandates a minimum sentence of 25 years and a maximum of life in prison for first-time child sex offenders.

O'Reilly has long said that he does not identify with any political ideology, and says the general public "might be wondering if whether I'm conservative, liberal, libertarian, or exactly what....

See, I don't want to fit any of those labels, because I believe that the truth doesn't have labels. When I see corruption, I try to expose it. When I see exploitation, I try to fight it. That's my political position."

While this author likes what O’Reilly says here and there, it is not an endorsement of his beliefs, his broadcasts, or the books that he has written.  More people, I believe, should just take a stand and not support a particular party or movement because that is how they registered.

For example, this author is a registered Democrat but has a conservative view of fiscal policies which is not part of the Democratic platform.