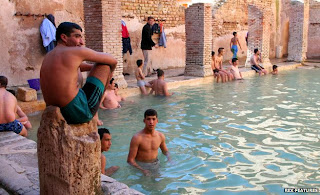 Roman baths in Khenchela, Algeria (above and below) are not remarkable because of the ancient architecture or remarkable state of preservation but the fact there is still a free and plentiful supply of hot water feeding into two open air baths.

"The Romans built them, before Jesus, but they were damaged in an earthquake and that's when the Ottomans came and repaired it," a friendly visitor will likely tell you since the daily ritual of public bathing is still clearly alive and well in Khenchela.

The important social function of a bathhouse has also been retained - family issues are discussed and resolved and jokes and stories are told to echoing laughter and the sound of a slapped thigh, back or hand.

Sport is heatedly debated, politics perhaps less so in this country - suspicion of who is hearing what remains a hangover from the civil war when careless talk cost lives. Few have the stomach or wish to risk more conflict - one of many plausible explanations as to why the Arab Spring went largely unnoticed in Algeria. 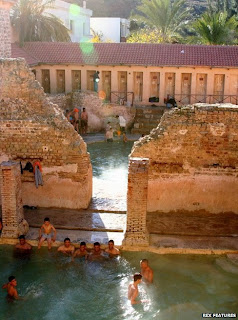 Aside from this striking continuity, what makes Khenchela stand out from many other historical sites in Algeria is the fact that despite being amongst the smallest, and certainly lesser known, it is one of the few places where you can easily interact with the local people.

There are several other sites for Roman Baths in Algeria, see below:


Roman Baths
Taking a bath was not a simple chore. There was not one bath to use in a large complex such as the one at Bath. A visitor could use a cold bath (the frigidarium), a warm bath (the tepidarium) and a hot bath (the caldarium).

A visitor would spend some of his time in each one before leaving. A large complex would also contain an exercise area (the palaestra), a swimming pool and a gymnasium. One of the public baths at Pompeii contains two tepidariums and caldariums along with a plunge pool and a large exercise area.

The building of a bath complex required excellent engineering skills. Baths required a way of heating up water. This was done by using a furnace and the hypocaust system carried the heat around the complex.

Water had to be constantly supplied. In Rome this was done using 640 kilometers of aqueducts - a superb engineering feat. The baths themselves could be huge. A complex built by the emperor Diocletian was the size of a football pitch.

Those who built them wanted to make a statement - so that many baths contained mosaics and massive marble columns. The larger baths contained statues to the gods and professionals were on hand to help take the strain out of having a bath.

Masseurs would massage visitors and then rub scented olive oil into their skin.
at 7:30 AM