But, It's An Emergency! 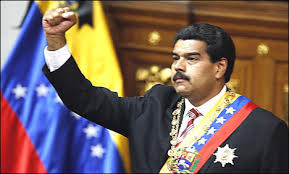 He acted as part of a so-called "economic war" against a crisis for which he blames the opposition "bourgeoisie" and imperialism.

Under new powers granted to Maduro on Tuesday, the two new laws aim to control prices and profits in the business sector and closely monitor imports and exports and hard currency that comes in from oil sales, Venezuela's main source of revenue.

Maduro's government says the business sector has been chalking up profit margins of up to 1,000 percent on imported goods.

The center-right opposition has called a rally for Saturday to protest the emergency powers granted to Maduro, the handpicked successor of the late populist president Hugo Chavez.

Venezuela's economic woes are marked by inflation running at 54 percent and shortages of basic goods, among other problems.

The opposition says the new powers are a tool granted to the government for electoral gain ahead of municipal elections on December 8.

These are seen as a test of popular sentiment toward Maduro, who took power after narrowly winning an April election weeks after Chavez died of cancer.

Venezuela, officially called the Bolivarian Republic of Venezuela, is a country on the northern coast of South America. Venezuela's territory covers around 916,445 square kilometres with an estimated population of approximately 29,100,000.

In case you did not know:

The Organization of the Petroleum Exporting Countries (OPEC) was founded in Baghdad, Iraq, with the signing of an agreement in September 1960 by five countries namely Islamic Republic of Iran, Iraq, Kuwait, Saudi Arabia and Venezuela. They were to become the Founder Members of the Organization.
at 7:30 AM