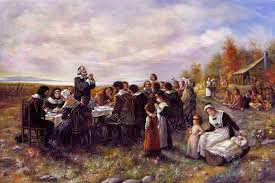 On the fourth Thursday of November, Americans celebrate Thanksgiving, a national holiday honoring the early settlers and their harvest feast known as the first Thanksgiving.

Native Americans
Long before settlers came to the East Coast of the United States, the area was inhabited by many Native American tribes. The area surrounding the site of the first Thanksgiving, now known as southeastern Massachusetts and eastern Rhode Island had been the home of the Wampanoag people for over 12,000 years, and had been visited by other European settlers before the arrival of the Mayflower. The native people knew the land well and had fished, hunted, and harvested for thousands of generations.

The Settlers
The people who comprised the Plymouth Colony were a group of English Protestants who wanted to break away from the Church of England. These ‘separatists’ initially moved to Holland and after 12 years of financial problems, they received funding from English merchants to sail across the Atlantic to settle in a ‘New World.' A ship carrying 101 men, women, and children spent 66 days traveling the Atlantic Ocean, intending to land where New York City is now located. Due to the windy conditions, the group had to cut their trip short and settle at what is now called Cape Cod. 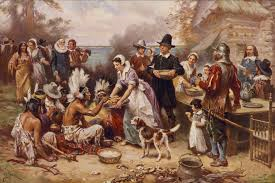 Settling and Exploring
As the Puritans prepared for winter, they gathered anything they could find, including Wampanoag supplies.

One day, Samoset, a leader of the Abenaki, and Tisquantum (better known as Squanto) visited the settlers. Squanto was a Wampanoag who had experience with other settlers and knew English. Squanto helped the settlers grow corn and use fish to fertilize their fields. After several meetings, a formal agreement was made between the settlers and the native people and they joined together to protect each other from other tribes in March of 1621.

The Celebration
One day that fall, four settlers were sent to hunt for food for a harvest celebration. The Wampanoag heard gunshots and alerted their leader, Massasoit, who thought the English might be preparing for war. Massasoit visited the English settlement with 90 of his men to see if the war rumor was true. Soon after their visit, the Native Americans realized that the English were only hunting for the harvest celebration. Massasoit sent some of his own men to hunt deer for the feast and for three days, the English and native men, women, and children ate together. The meal consisted of deer, corn, shellfish, and roasted meat, far from today's traditional Thanksgiving feast.

They played ball games, sang, and danced. Much of what most modern Americans eat on Thanksgiving was not available in 1621.

Although prayers and thanks were probably offered at the 1621 harvest gathering, the first recorded religious Thanksgiving Day in Plymouth happened two years later in 1623. On this occasion, the colonists gave thanks to God for rain after a two-month drought.

The MythsBelieve it or not, the settlers didn't have silver buckles on their shoes. Nor did they wear somber, black clothing. Their attire was actually bright and cheerful. Many portrayals of this harvest celebration also show the Native Americans wearing woven blankets on their shoulders and large, feathered headdresses, which is not true. The Englishmen didn’t even call themselves Pilgrims. 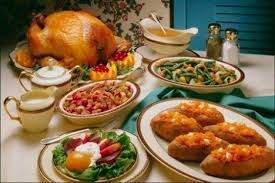 It wasn't until 1863, when President Abraham Lincoln declared two national Thanksgivings; one in August to commemorate the Battle of Gettysburg and the other in November to give thanks for "general blessings."

Native Americans and Thanksgiving
The peace between the Native Americans and settlers lasted for only a generation. The Wampanoag people do not share in the popular reverence for the traditional New England Thanksgiving. For them, the holiday is a reminder of betrayal and bloodshed. Since 1970, many native people have gathered at the statue of Massasoit in Plymouth, Massachusetts each Thanksgiving Day to remember their ancestors and the strength of the Wampanoag.

Text adapted from 1621 A New Look at Thanksgiving by Catherine O'Neill Grace and Margaret M. Bruchac with Plimoth Plantation, 2001, National Geographic Society.
at 8:00 AM

Email ThisBlogThis!Share to TwitterShare to FacebookShare to Pinterest
Labels: Thanksgiving