Lee Manchester (below), a 61-year-old former mid-level manager and entrepreneur who lost two jobs in the aftermath of the financial crisis, talks about how she downsized and is living with a friend on Cape Cod. Like many baby boomers, she is less secure financially and prepared for retirement than her father, who's 87. 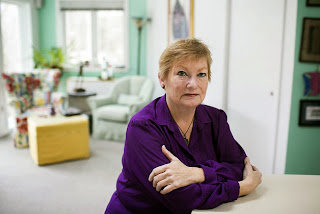 For the first time in generations, the next wave of retirees will probably be worse off than the current elderly. Manchester speaks at the cottage she shares in Wellfleet, Massachussets. (Source: Bloomberg)

Eighty-seven-year-old Lew Manchester Buddhist temples has just returned from a three-week trip touring in Laos and cruising the Mekong Delta in Vietnam. His 61-year-old daughter Lee lives year-round in the basement of her friend’s Cape Cod cottage, venturing into the winter cold to get to the bathroom.

Lew is making the most of his old age. Lee is paring back and lightening her load as she looks ahead to her later years. Both worked all their lives, both saved what they could. Yet Lew, a son of the Great Depression and former company man, and Lee, a baby boomer who has pursued careers as an entrepreneur and a mid-level manager, are winding up in two very different economic strata.

“Timing is everything and my dad’s timing with jobs, real estate and retirement benefits was better,” said Lee.

While plenty of baby boomers, born from 1946 to 1964, have become affluent and many elderly around the U.S. face financial hardship, the wealth disparity of this father and daughter is emblematic of a broad shift occurring around the country.

A rising tide of graying baby boomers is less secure financially and has a lower standard of living than their aged parents.
at 2:00 PM