Climatic changes...   and the results of those changes  ... could occur within decades or even sooner, and they are becoming a greater concern for scientists, according to a new paper from the National Academy of Sciences. 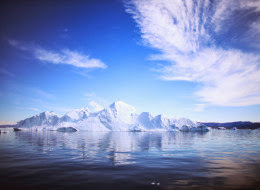 "The most challenging changes are the abrupt ones," said James White, a professor of geological sciences at the University of Colorado in Boulder and chair of the report committee. White and several coauthors of the paper spoke at a press conference Tuesday morning.

The paper focuses on those impacts due to climate change that can happen most quickly. Among these are the rapid decline in Arctic sea ice (above) that scientists have seen in the last decade and increased extinction pressure on plants and animals caused by the rapidly warming climate.

Many such changes, according to Tony Barnosky, a professor in the Department of Integrative Biology at the University of California, Berkeley, are "things that people in this room will be around to see." He emphasized that scientists are "really worried about what's going to happen in the next several years or decades."

"The planet is going to be warmer than most species living on Earth today have seen it, including humans," said Barnosky. "The pace of change is orders of magnitude higher than what species have experienced in the last tens of millions of years."

Other, more gradually occurring changes can still have abrupt impacts on the ecosystem and human systems, such as the loss of fisheries or shifts in where certain crops can be cultivated. Rapid loss of ice, for example, would mean that sea levels rise at a much faster rate than the current trend, which would have a significant effect on coastal regions. A 3-foot rise in the seas is easier to prepare for if it happens on a 100-year horizon than if it happens within 30 years.

"If you think about gradual change, you can see where the road is and where you're going," said Barnosky. "With abrupt changes and effects, the road suddenly drops out from under you."

The paper did offer two bits of good news. One, scientists don't believe that climate change is likely to shut down the Atlantic jetstream, a possibility that had been discussed in some scientific research. They also don't believe that large, rapid emissions of methane from ice and Arctic soil will pose a serious threat in the short term, as had been considered previously.

"Giant methane belches are not a big worry," said Richard Alley, a professor of geosciences at Pennsylvania State University and committee member. "These really are systems that will affect us in the future, but they don't look like they're going to jump really fast."

The paper recommends increased investment in an early-warning system for monitoring abrupt impacts, such as surveillance programs to facilitate closer tracking of melting ice and methane releases, for example. Right now, investment in those systems is lacking in the U.S., and monitoring programs have been cut in recent years.

"The time has come for us to quit talking and actually take some action," said White. He noted that in the modern age, there are cameras everywhere, yet "remarkably very few of those watching devices are pointed at the environment."
at 8:00 AM