It is better to be right 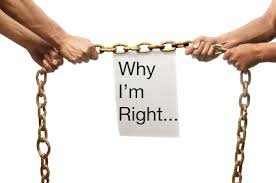 As part of an unusual experiment, the husband was instructed to “agree with his wife’s every opinion and request without complaint,” and to continue doing so “even if he believed the female participant was wrong,” according to a report on the research that was published Tuesday by the British Medical Journal.

The husband and wife were helping a trio of doctors test their theory that pride and stubbornness get in the way of good mental health. In their own medical practices in New Zealand, they had observed patients leading “unnecessarily stressful lives by wanting to be right rather than happy.”

If these patients could just let go of the need to prove to others that they were right, would greater happiness be the result?

Both spouses were asked to rate their quality of life on a scale of 1 to 10 (with 10 being the happiest) at the start of the experiment and again on Day 6. It’s not clear how long the experiment was intended to last, but it came to an abrupt halt on Day 12.

“By then the male participant found the female participant to be increasingly critical of everything he did,” the researchers reported. The husband could not take it anymore, so he made his wife a cup of tea and told her what had been going on.

That led the researchers to terminate the study.

Over the 12 days of the experiment, the husband’s quality of life plummeted from a baseline score of 7 all the way down to 3. The wife started out at 8 and rose to 8.5 by Day 6. She had no desire to share her quality of life with the researchers on Day 12, according to the report.

Still, the team was able to draw some preliminary conclusions.

“It seems that being right, however, is a cause of happiness, and agreeing with what one disagrees with is a cause of unhappiness,” they wrote. They also noted that “the availability of unbridled power adversely affects the quality of life of those on the receiving end.”
at 8:00 AM