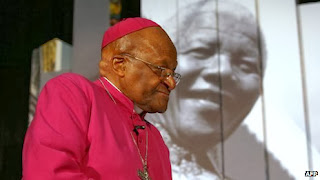 Police in South Africa say retired Archbishop Desmond Tutu's home was robbed while he was away to attend a memorial honoring Nelson Mandela.

The 82-year-old Tutu previously had his home robbed in August as he and his wife slept inside; however, both were unhurt.  Burglaries and home-invasions frequently occur in South Africa.

However, Archbishop Desmond Tutu has said that Nelson Mandela would have been appalled that Afrikaners were excluded from memorial services marking his death.

He highlighted the absence of the Dutch Reformed Church and the limited use of the Afrikaans language at the services.

"I also believe it may have sent out a more inclusive message had the program directors at the Memorial and Funeral - both national and State events - not both been senior office-bearers of the ruling party," he said.

Archbishop Tutu fought apartheid, along with Mr Mandela and the ANC, but has become increasingly critical of the party, welcoming the launch of a new opposition party in June.

He almost did not attend Sunday's funeral for his close friend, saying he had not been invited.

In a statement, he described Mr Mandela as a "nation builder" who "went out of his way" to include Afrikaners after the end of apartheid.

"We were amiss in not being as inclusive as Madiba [Mandela's clan name] would certainly have been," he said.

"To the extent that I can do so meaningfully, I apologize to our sisters and brothers in the Afrikaner Community," he added. 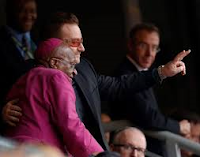 But, the world knows that BONO  was allowed to attend the funeral.
at 2:00 PM