Teams of researchers are hoping to give life to a six-foot, 330-pound humanoid robot at the the Robotics Challenge in Homestead, Fla. on Dec. 20 and 21. 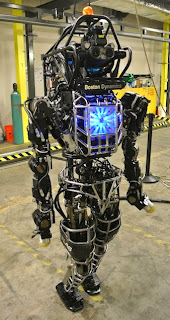 The teams are expected to enable the robot -- and others -- to autonomously walk, use human tools and drive a car.

The event is sponsored by DARPA, or the Defense Advanced Research Projects Agency, an arm of the U.S. Department of Defense that focuses on advanced research.

DARPA said the program at the Homestead Miami Speedway, is aimed at developing robots capable of working hand-in-hand with humans during natural or man-made disasters.

"Think of the nuclear plants that were damaged during the tsunami in Japan," said David Conner, a senior research scientist with TORC Robotics, whose team is includes with roboticists from Virginia Polytechnic Institute, better known as Virginia Tech.

"If they could have gone in and opened some valves to vent some of the hydrogen, they could have avoided an explosion. If we could have sent a robot in to do that task, it wouldn't have put humans in danger. That's the motivating goal in this project.

"We're working to raise the realm of what's possible," he added.

The test is part of a multi-year competition that's divided into three phases. The Florida event is the second phase. The final phase is set for late in 2014. The winner will receive a $2 million prize.

"Robots right now, for the most part, are either on stationary bases working on repetitive tasks or working in a lab," said Gill Pratt, a DARPA program manager. "We're trying to move to task-level autonomy. Instead of saying, 'Move ahead a tenth of an inch,' we'd say, 'Move forward and open that door.' During a disaster, communications could be very poor.

The robot needs more smarts to be able to do things on its own."  Robots have yet to reach that level of development. In fact, to date they are far from it.

However, Peter Neuhaus, a research scientist and member of the Florida Institute for Human and Machine Cognition team, said that at the close of the current challenge next year, the vision of having a robot work in a disaster area will be much closer.