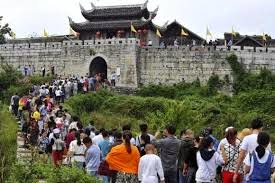 BEIJING (Reuters) - China has started work on a national database to help rein in some of its unruly sightseers and monitor the behavior of habitual offenders, state media said, after some instances of graceless conduct brought its tourists unwanted notoriety.

Chinese tourists overtook Americans and Germans as the world's top-spending travelers in 2013, the World Tourism Organization says, but questionable behavior has given offense in some countries, making them unwelcome.

In 2013, a Chinese school student scrawled his name on the wall of an ancient temple in Luxor, causing outrage in Egypt.

In Hong Kong, the former British colony that returned to Chinese rule in 1997, anger reached boiling point last year when a mainland couple allowed their two-year-old to defecate on a sidewalk.

Last month, a Chinese woman scalded a flight attendant on a Thai AirAsia flight from Bangkok by throwing hot water at her, in the most recent incident involving people from the country traveling overseas.

A system that tracks bad behavior by Chinese tourists is in the works, the official Xinhua news agency said on Thursday, citing Li Jinzao, head of the National Tourism Administration.

Once it is in place, habitual offenders may find it tough to board planes or book hotels, with the data being shared with airlines, hotels and travel agencies. The system would also rank offences by severity, the report said.

The system provides for punishment for unruly tourists, but Xinhua did not give details.

In the past, a government embarrassed over the antics of its citizens abroad has tried to mend China's image, even issuing a guidebook for "civilized tourism" with instructions to take moderate servings at buffets, and avoid going out bare-chested.