With drone sales soaring it’s inevitable that new and nefarious applications for them will emerge. Never has a technology emerged which someone, somewhere has failed to find an annoying or illegal use for. 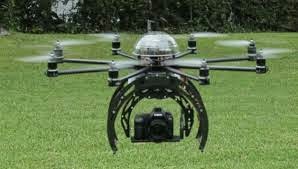 There have already been several cases of celebrities including Miley Cyrus, Selena Gomez and Rihanna having their privacy invaded by paparazzi drone pilots hovering overhear and snapping away on a remote-controlled camera.

One was even said to have disrupted Tina Turner’s wedding.

But even non-celebrities may not appreciate having the whirring aircraft flying near their homes or places of business.

Enter the Rapere, a prototype drone-hunting drone which can down other tiny unmanned aircraft by entangling special string in their rotors.

A group claiming to be “commercial drone developers” have created the machine which can automatically identify drones, hover above them and release a “tangle-line” that falls into their rotors and causes it to crash. It will then return to its base station for recharging and re-arming.

It has been designed to be faster and more agile than other drones to ensure that they can't escape - partly by limiting flight time and therefore reducing weight.

“Having worked in the UAS industry for years, we've collectively never come across any bogus use of drones. However it's inevitable that will happen, and for people such as celebrities, where there is profit to be made in illegally invading their privacy, there should be an option to thwart it,” the group say on their website.

“It can tell the difference between a bird and a drone, and will fly over top of any drone within range, then disable it.”

The designers are still working on refining the design and in talks about mass production, but warn on their website that “it won’t be cheap”.

“It will be priced as a professional tool - we don't want this to become a toy people can use to disrupt legitimate drone use.”

There could also be legal problems. The issue of whether or not it would be legal to use is summed up on their website: “it depends on how you plan to use it, and where you live”.
at 2:00 PM