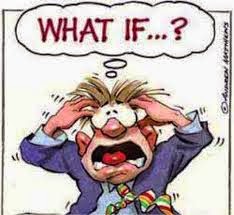 According to Melissa Dahl the tendency to worry about stuff could be a sign of a certain kind of intelligence, according to a paper in an upcoming edition of the journal Personality and Individual Differences (hat tip to Christian Jarrett at the British Psychology Society's Research Digest for spotting it first).

A team led by Alexander Penney of Ontario's Lakehead University gave 126 undergrads a litany of surveys and questionnaires designed to measure both their intelligence and how much they tended to stress about events in their lives.

(For instance, they were asked how strongly they agreed with statements like, "I am always worried about something.") After analyzing the results, Penney and his team found a correlation between worrying and verbal intelligence.


Correlation doesn't imply causation, of course, but this is not the first paper to have found a link between anxiety and intelligence.

On the other hand, Penney and his colleagues also found an interesting association in the other direction: The more respondents said they replayed past events over in their minds, the lower they ranked on non-verbal intelligence.

Penney and colleagues have this to offer:

It is possible that more verbally intelligent individuals are able to consider past and future events in greater detail, leading to more intense rumination and worry. Individuals with higher non-verbal intelligence may be stronger at processing the non-verbal signals from individuals they interact with in the moment, leading to a decreased need to re-process past social encounters.

In other words, the verbally intelligent are tormented by their memory for detail, while those better at picking up on non-verbal cues are able to pick up more information in the moment and have less of a need to rehash events in their heads after wards.

It all makes for some interesting research, and a potential upside to being a worrier.

Email ThisBlogThis!Share to TwitterShare to FacebookShare to Pinterest
Labels: Worrying