Earlier this week, Huckabee ended his Fox News talk show so he could spend time mulling another bid for the Republican nomination. If the contents of Huckabee's latest book - due out January 20th - are any indication, the overarching message of that campaign will be that the government is, um, having its way with the American public in a method that Huckabee, a Christian conservative, finds rather repulsive. 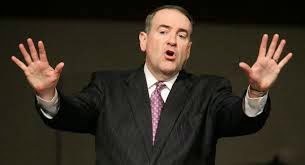 "Bend Over and Take it Like a Prisoner!" is the title of the 10th chapter of Huckabee's 12th book, God, Guns, Grits, and Gravy - which, as a whole, is an achievement in the genre of poorly written pandering.

The chapter, ostensibly about the TSA and IRS, is a soaring crescendo of latent homosexuality homoeroticism cloaked in almost libertarian – but not libertine! – conservatism.

It opens with Huckabee's dramatic recollection of going through security at the airport. "Where else would I be ordered to stand still, put up my hands, and have my personal belongings taken and searched without a warrant or probable cause?" He asks.

"After years of this indignity, much of the flying public thinks little of it, and they usually don't complain. They just dutifully stand there, bend over, and take it like a prisoner."

Clickbait title notwithstanding, Bend Over and Take It Like a Prisoner! is not devoid of substance. Although Huckabee's condescending tone - like that of an elementary school history teacher - makes it difficult to take seriously.

He takes aim at the Department of Homeland Security and the USA Patriot Act: "…did anyone anticipate that not many terrorists would really get punished as a result of this act, but that American citizens would?"

He then quotes Benjamin Franklin: "Those who would give up essential Liberty, to purchase a little temporary Safety, deserve neither Liberty nor Safety."

"What would Ben say today?" Huckabee wonders. "Would he cheerfully go through a full-body scanner that electronically strip-searched him and then allow a federal agent to put his blue-gloved hands inside his pants and over his thighs, crotch, and upper body for the sake of domestic travel on a privately owned commercial carrier?

I'll bet you a Benjamin that he most certainly would not. (Come to think of it, though, kite flying Ben would definitely be in awe of this and every other use of…electricity! Also airplane flight, but I digress.)"

He then provides some insight into his psyche - complete with Animal House reference.

While excoriating the IRS, Huckabee brings his readers along on a flashback to his youth.

"They remind me of a sadistic coach at my high school who used to enjoy 'giving licks' to teen boys for any infraction of his rules.

Just so you know, 'giving licks' was the term used to describe the coach hitting the butt of a student with a short-handled boat paddle, riddled with holes to minimize wind resistance and enhance striking power…The coach had a rule that if you got a 'lick' you were required to say, 'Thanks, coach, may I have another one?'

And most often he would say, 'Sure,' and pop you again. One might get three or four before the coach finally said, 'No, I think you've had enough,' and stop his twisted abuse of a helpless adolescent. Whenever I think of the IRS, I see that coach standing with his paddle, expecting em to say, 'Thanks, IRS, may I have another one?’"

In closing, Huckabee condemns the current US government for being a "ham-fisted, hypercontrolling 'Sugar Daddy,’ " that has conditioned Americans "to just bend over and take it like a prisoner." But, Huckabee writes, "In Bubba-ville, the days of bending are just about over. People are ready to start standing up for freedom and refusing to take it anymore."

Now, the book does include a disclaimer on the back cover.