Students In Poverty in US 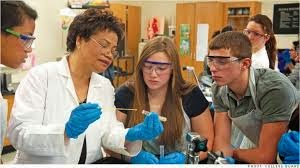 For the first time in at least 50 years, a majority of U.S. public school students come from low-income families, according to a new analysis of 2013 federal data, a statistic that has profound implications for the nation.

The Southern Education Foundation reports that 51 percent of students in pre-kindergarten through 12th grade in the 2012-2013 school year were eligible for the federal program that provides free and reduced-price lunches.

The lunch program is a rough proxy for poverty, but the explosion in the number of needy children in the nation’s public classrooms is a recent phenomenon that has been gaining attention among educators, public officials and researchers.

“We’ve all known this was the trend, that we would get to a majority, but it’s here sooner rather than later,” said Michael A. Rebell of the Campaign for Educational Equity at Teachers College at Columbia University, noting that the poverty rate has been increasing even as the economy has improved.

The shift to a majority-poor student population means that in public schools, a growing number of children start kindergarten already trailing their more privileged peers and rarely, if ever, catch up.

They are less likely to have support at home, are less frequently exposed to enriching activities outside of school, and are more likely to drop out and never attend college.

It also means that education policy, funding decisions and classroom instruction must adapt to the needy children who arrive at school each day.

“When they first come in my door in the morning, the first thing I do is an inventory of immediate needs: Did you eat? Are you clean? A big part of my job is making them feel safe,” said Sonya Romero-Smith, a veteran teacher at Lew Wallace Elementary School in Albuquerque. Fourteen of her 18 kindergartners are eligible for free lunches.

She helps them clean up with bathroom wipes and toothbrushes, and she stocks a drawer with clean socks, underwear, pants and shoes.

Romero-Smith, 40, who has been a teacher for 19 years, became a foster mother in November to two girls, sisters who attend her school. They had been homeless, their father living on the streets and their mother in jail, she said. When she brought the girls home, she was shocked by the disarray of their young lives.

The job of teacher has expanded to “counselor, therapist, doctor, parent, attorney,” she said.

Schools, already under intense pressure to deliver better test results and meet more rigorous standards, face the doubly difficult task of trying to raise the achievement of poor children so that they approach the same level as their more affluent peers.

“This is a watershed moment when you look at that map,” said Kent McGuire, president of the Southern Education Foundation, the nation’s oldest education philanthropy, referring to a large swath of the country filled with high-poverty schools.

“The fact is, we’ve had growing inequality in the country for many years,” he said. “It didn’t happen overnight, but it’s steadily been happening. Government used to be a source of leadership and innovation around issues of economic prosperity and upward mobility. Now we’re a country disinclined to invest in our young people.”

The data show poor students spread across the country, but the highest rates are concentrated in Southern and Western states. In 21 states, at least half the public school children were eligible for free and reduced-price lunches — ranging from Mississippi, where more than 70 percent of students were from low-income families, to Illinois, where one of every two students was low-income.

Email ThisBlogThis!Share to TwitterShare to FacebookShare to Pinterest
Labels: School Students, US Poverty