COLUMBUS, Ohio (AP) — A former substitute teacher who showed a movie featuring graphic sex and violence to a high school class has been convicted of disseminating matter harmful to juveniles. 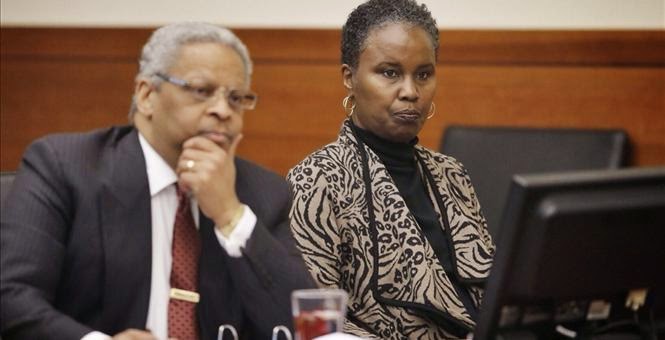 Sheila Kearns (above) showed the film, "The ABCs of Death," during five periods of a Spanish class at East High School in Columbus in April 2013, prosecutors said. The movie consists of 26 chapters, each depicting some form of grisly death and representing a letter of the alphabet, such as "E is for Exterminate," ''O is for Orgasm" and "T is for Toilet."

A jury convicted Kearns of four felony counts on Thursday. The convictions carry possible jail sentences, but Kearns, 58, is expected to get probation when she's sentenced in March.

Kearns contended she didn't watch the movie beforehand or while showing it and was unaware of its content, The Columbus Dispatch reported. Her attorney said she never would have knowingly showed it.

But a student testified at Kearns' trial the teacher did watch the 129-minute movie. The student said the movie was "disturbing" and said students in the class went "crazy" while watching it.

An assistant principal who saw the DVD movie playing in the classroom confiscated it.

Prosecutor Kacey Chappelear said the movie's title should have tipped off Kearns that she should check it out before showing it to her students, who ranged in age from 14 to 18.

Detective Lolita Perryman testified Kearns seemed unconcerned when the movie's content was described to her.

Perryman said she talked with Kearns about the movie chapter "L is for Libido," about a sex contest whose winner is killed by a chain saw.

"She told me," Perryman said, "'Those kids see worse than that at home.'"

Jurors watched the movie, which rates 4.7 out of 10 stars on the IMDb website, on Tuesday. After court on Thursday, the jury foreman told the newspaper it wasn't proof Kearns was aware of the movie's content the first time she showed it but she would have known by the second, third, fourth and fifth showings.