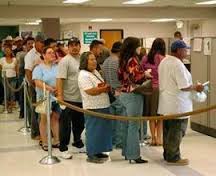 LePage is one of several Republican governors who has recently pushed drug tests for safety net programs like Temporary Assistance for Needy Families and the Supplemental Nutrition Assistance Program.

The state backed down after the U.S. Department of Agriculture, which oversees food stamps, let state officials know breaking the rules could cost them administrative funding from the federal government. Walker has pushed ahead anyway, saying he wants to fight the federal government on it.

"We must ensure that our tax dollars do not enable the continuation of a drug addiction," LePage said last year.

The scheme, which at the time still had to go through a rule-making process, was originally approved by the Maine Legislature in 2011, a time when statehouse Republicans across the country were making similar moves.

Only convicted felons would have to submit to tests, a narrow targeting that makes Maine's measure less vulnerable to legal challenge from civil liberties advocates.

Florida's 2011 drug testing program, which forced all applicants to pee in cups, was halted by a federal judge, a decision that has been repeatedly upheld on appeal.

In Florida and other places were testing has been implemented, very few applicants' results have turned up positive for drug use.

I don't think I would like it very much if I had to be drug tested in order to receive my Social Security benefits, would you?