Another Carrot and Stick Story 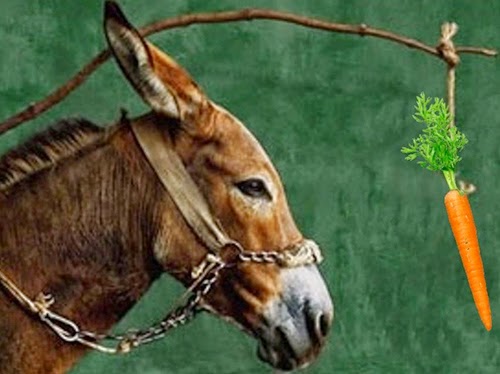 EVERYONE knows that nothing takes place in business and very little work gets done in business and industry without offering employees incentives for doing that work... in addition to their salary, sick leave, annual leave, holidays, and other benefits.

In fact, in 1990 when I taught a class of nothing but PhDs a new way of accomplishing work that involved teamwork, I was told that they would not use the new process until they were given an incentive to do so.

If a department head did not reach their goals, the other department heads would “shun” and “shame” that individual because it was he or she that prevented them from getting a bonus that year.

It is amazing what you can get both males and females to do, regardless of position, in order to be eligible to receive a bonus... called a CARROT... or, Behavior Modification.

Behavior modification is the traditional term for the use of empirically demonstrated behavior change techniques to increase or decrease the frequency of behaviors, such as altering an individual's behaviors and reactions to stimuli through positive and negative reinforcement of adaptive behavior and/or the reduction of behavior through its extinction, punishment and/or satiation. It is similar to operant conditioning but with the absence of the antecedent. Behavior modification is now known as Applied behavior analysis (ABA) which is more analytical than it used to be.

The first use of the term behavior modification appears to have been by Edward Thorndike in 1911. His article Provisional Laws of Acquired Behavior or Learning makes frequent use of the term "modifying behavior". Through early research in the 1940s and the 1950s the term was used by Joseph Wolpe's research group.

The use of positive reinforcement to change behavior has many applications to organizational training. An assessment called performance audit is conducted first, to determine the problems or behaviors that can be modified for more efficient job performance.

A program of positive reinforcement is then introduced to reward employees for displaying the desired behaviors, such as reducing errors or production time per unit. Punishment or reprimands are not used: although these may temporarily eliminate an undesirable behavior, they may leave in its place anxiety, hostility and anger.

Providing positive reinforcement is much more effective in improving employee productivity and behavior.

Hence, our incentive, bonus, and annual merit pay. However, some employers like to keep this concept stimulated daily, weekly, and monthly in order to stimulate quarterly profits.

I asked her how and she proceeded to tell me the story and then ended with a “statement of fact” that a co-worker got a tooth almost every week. Before I could ask how, she told me that she had said to him recently,

“Are you filling out the paperwork for them?”

“No,” he replied, “but I do put a copy of the form in the folder they take with them and tell them about what will happen for me if they take the time to fill it out.”

My wife then stated emphatically, “I'm going to start doing that.”

What got me to thinking was that when employees do that with customers in order to get a bonus, they may not be exhibiting the actual behavior that was intended by management for the bonus to be granted.

In other words, they have found a way to circumvent the process to simply generate more income for themselves.

Personally, I have always been opposed to the carrot and stick method of achieving results. The original idea was developed years ago when a horse and buggy driver tied a carrot onto the end of a stick and suspended it over and in front of the horse's head. The horse would move forward on his own thinking he would eventually get the carrot but he never did or maybe the driver felt sorry for him at the end of the day and gave it to him, I don't know.

But, whenever I see the carrot and stick treatment being used on me, I refuse to participate regardless of the little bit of incentive money it is going to cost me. If I do good work, I will get a substantial raise and I do not need weekly or monthly reminders that I need to continue doing that... I remind myself.

College Business Schools teach students who will become potential leaders of business how to successfully manipulate the workforce to achieve results and increase output, while assuming that the workforce is either gullible or stupid and therefore will never “catch on.” And, I would submit to you that our business graduates are far more gullible and stupid because they believe that CRAP.
at 8:00 AM