A Belgian court has jailed the leader of a group that sent jihadists to Syria, in the largest-ever trial of its kind in the country.

The court in Antwerp found a total of 45 members of the Sharia4Belgium group guilty of terror-related offenses. 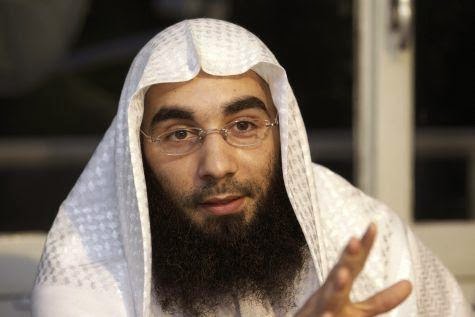 The judge called the organization "a terrorist group" and sentenced leader Fouad Belkacem (above) to 12 years in prison.

The other 44 members were given sentences, some suspended, ranging between three and 15 years.

The group sent recruits to militant groups such as Islamic State (IS), prosecutors said.

Only seven of the accused were at the court for the ruling. Most others are said to still be in Syria, and some may already be dead.

One high-profile member, Jejoen Bontinck, got a suspended sentence of 40 months. He made headlines after his father traveled to Syria and brought him home, and later appeared in the trial as a prosecution witness.

Prosecutors said Fouad Belkacem brainwashed dozens of young men to fight with jihadi groups in Syria. The court heard evidence that he used lectures and social media to recruit and radicalise people.

Some of the witnesses accused him of indoctrinating them. Prosecutors also presented wiretaps and video images as evidence which, they argued, proved Sharia4Belgium members were involved in terror activities. Mr Belkacem denied the charges against him.

In an open letter to the press he said that he "never recruited, incited or sent" fighters to Syria. His lawyers argued that he did not buy anyone flights to Syria or introduce his followers to jihadists.

They estimate that 10% of the Belgians who have gone to fight in Syria had links to Sharia4Belgium.
European security agencies fear that jihadists who return from those countries could mount attacks on domestic targets.

Belkacem, the ringleader of the now defunct Sharia4Belgium, smiled as the judge read out his ruling. He had denied the charges.

The judge said he was "responsible for the radicalization of young men to prepare them for Salafist combat, which has at its core no place for democratic values".

Email ThisBlogThis!Share to TwitterShare to FacebookShare to Pinterest
Labels: Islam