Left In Darkness, They Seek Out Light 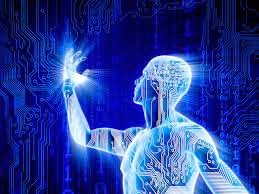 From the movie, I Robot,

Detective Del Spooner (played by the actor Will Smith) said:
Human beings have dreams. Even dogs have dreams, but not you, you are just a machine. An imitation of life. Can a robot write a symphony? Can a robot turn a... canvas into a beautiful masterpiece?
Sonny (the robot) said: Can *you*?

Detective Del Spooner: I thought you were dead.
Sonny: Technically I was never alive, but I appreciate your concern.


Alan Mathison Turing, (1912– 1954) is widely considered to be the father of theoretical computer science and artificial intelligence. Turning proposed that a machine may need a human-like body to think and speak:

“It can also be maintained that it is best to provide the machine with the best
sense organs that money can buy, and then teach it to understand to speak
English. That process could follow the normal teaching of a child. Things
would be pointed out and named, etc. Again, I do not know what the right
answer is, but I think both approaches should be tried...” Turing, 1950.

So, sixty five years ago, there were people in the world who were exploring the feasibility and development of artificial intelligence. However, science fiction writers had broached the subject before 1950, the first of which was in Gulliver's Travels, by Jonathan Swift, where a mechanical information generator was mentioned.

As far as movies were concerned, in 1955 This Island Earth featured the interociter and the Hall 9000 in 2001: A Space Odyssey. In the 1970's, there was Dark Star, Demon Seed, and Rollerball, and The Terminator and War Games in the 1980's. The 1990's gave us The Demolition Man, Freejack, and The Matrix, and from 2000's, we have Iron Man, The Red Planet, and A. I. Artificial Intelligence.

We, as a movie going population, have been completely acclimated and are accepting of the Artificial

Intelligence concept and no doubt with the fantastic expectation that we actually expect it to happen in our lifetime.... and, maybe it will... who knows.... but, is this a good thing?
Founded in 1979, the Association for the Advancement of Artificial Intelligence (AAAI) (formerly the American Association for Artificial Intelligence) is a nonprofit scientific society devoted to advancing the scientific understanding of the mechanisms underlying thought and intelligent behavior and their embodiment in machines.

AAAI aims to promote research in, and responsible use of, artificial intelligence. AAAI also aims to increase public understanding of artificial intelligence, improve the teaching and training of AI practitioners, and provide guidance for research planners and investors regarding the importance and potential of current AI developments and future directions.

And, students who have taken this course are saying:
"Nothing short of awesome. This is a top-notch class that teaches you a lot of important concepts in optimization and AI, while making you feel like you're on a wonderful adventure of discovery and fun."

The course will introduce the basic ideas and techniques underlying the design of intelligent computer systems and will focus on Behavior from Computation that will cover the following areas:
Statistical and decision–theoretic modeling paradigm.
Reasoning and Learning.
Applications for a wide variety of artificial intelligence problems.

Simply put, the term artificial intelligence is the theory and development of computer systems able to perform tasks that normally require human intelligence, such as visual perception, speech recognition, decision-making, and translation between languages.

Don't some of our smart phones and other smart devices already do some of this... so, are we already so far entrenched with Artificial Intelligence that we cannot turn back... or, can we turn back? But, if we can turn back, should we?

"The Measure of a Man" is the ninth episode of the second season of the syndicated science fiction television series Star Trek: The Next Generation, the 35th episode overall, first broadcast on February13, 1989. It is written by Melinda M. Snodgrass and directed by Robert Scheerer. In the episode, the android officer Lieutenant Commander Data must fight for his right of self-determination in order not to be declared the property of Starfleet and be disassembled in the name of science.

Picard initially finds Riker's prosecution difficult to challenge: on the account of Data being a human(oid) being, Riker, while apologizing, hits Data's off-switch, causing him to go numb; "Pinocchio is broken: its strings have been cut.", being the most challenging part. However, during a recess, Picard talks to Guinan who suggests that regardless of whether Data is a machine or not, Maddox's goal is tantamount to sanctioning slavery. Picard uses this to defuse Riker's arguments when the court reconvenes. The discussion of Data's sentience turns to metaphysical matters. Picard points out that Data meets two of the three criteria that Maddox uses to define sentient life. Data is intelligent and self-aware, but Picard asks anyone in the court to show a means of measuring consciousness

Murray Shanahan, professor of cognitive robotics at Imperial College London, cautioned against “capitalist forces” developing AI without any sense of morality, arguing it could lead to potentially “uncontrollable military technologies.”
Shanahan’s comments follow warnings from leading scientists and entrepreneurs, including Stephen Hawking, Bill Gates, and Tesla Motors CEO Elon Musk.
Gates admitted last month that he doesn’t “understand why some people are not concerned” by the threat of AI.
Speaking to the Centre for the Study of Existential Risk at the University of Cambridge last week, Shanahan argued that AI development faces two options.
Either a potentially dangerous AI is developed – with no moral reasoning and based on ruthless optimization processes – or scientists develop AI based on human brains, borrowing from our psychology and even neurology.
“Right now my vote is for option two, in the hope that it will lead to a form of harmonious co-existence [with humanity],” Shanahan said.
AI based on the human brain would not be possible without first mapping the organ – a task the Human Connectome Project (HCP) is undertaking and aims to complete by late 2015.

Stephen Hawking, who has the motor neuron disease amyotrophic lateral sclerosis (ALS) or Lou Gehrig’s Disease and is paralyzed an unable to speak, is now capable of communicating verbally but only thanks to the help of an advanced artificial intelligence program developed for him by Intel.
“Once humans develop artificial intelligence, it will take off on its own and redesign itself at an ever-increasing rate,” Hawking warned.“Humans, who are limited by slow biological evolution, couldn’t compete and would be superseded.”
And let’s not forget, of course, aliens.
“If aliens ever visit us, I think the outcome would be much as when Christopher Columbus first landed in America, which didn’t turn out very well for the Native Americans,”he recently said.

Americans, like sheep, desire to be clustered in groups and be led to where there is food, opportunity, and shelter without needing to talk with their handlers or lawyers beforehand.