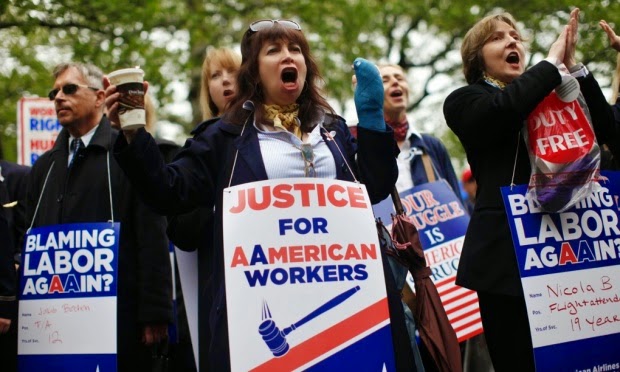 There are few crusades in American politics more quixotic than bashing unions.

They are a threat that exists mostly in the imaginations of their opponents: an all-powerful, resurgent labor movement that scares investors and imperils the economy, despite representing just 11% of the US workforce.

Right-to-work laws are their weapon of choice.

Last week, the Supreme Court announced it would hear a case that could very well finish off American unions in the last bastion where they have any significant presence at all, the public sector.

The case, Friedrichs v California Teachers Association, will decide if right-to-work laws (designed to bankrupt unions by encouraging employees who benefit from collective bargaining agreements to not pay for them) will extend to all public employees nationwide – an outcome Justice Samuel Alito has all but promised to deliver.

Those two states were the latest to pass right-to-work laws in 2012, a remarkable shift in that last geographic stronghold of organized labor.

Rauner contends that businesses, unshackled from the burden of union contracts, will rush to create jobs in Illinois communities – contrary to a University of Illinois study that found no such evidence for such a broad claim.

Economic arguments for right-to-work are, however, always highly speculative, proposing that the low-wage jobs that might be created by companies attracted by such laws would offset the very real, calculable income losses that inevitably accompany de-unionization.

So if these laws don’t boost the economy, what else don’t they do?


Despite what their proponents say, right-to-work laws don’t put an end to “compulsory union membership.” There is no such thing, not since 1947, when closed shops – arrangements where union membership was a condition of employment – were banned under the Taft-Hartley Act.

No one in the US can legally be fired for refusing to join a union, whether they are in a right-to-work state or not. Nor do such laws “protect” workers from having their dues diverted to political campaigns they do not support; workers already have that protection.
at 2:00 PM

Email ThisBlogThis!Share to TwitterShare to FacebookShare to Pinterest
Labels: Right to Work