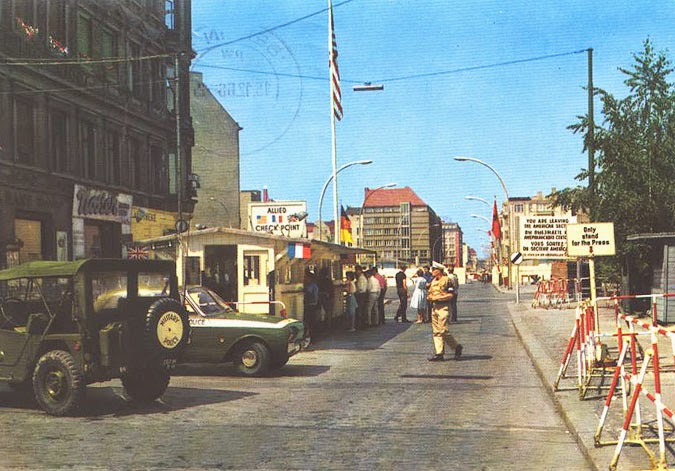 In 1966, after graduating from Cairo American College, in Cairo, Egypt, a group of us decided to travel through Europe on our way back to the US. As dependents of US Embassy Diplomats, our airfare was paid for as long as we kept moving forward with our destination towards the US, but in so doing we could still visit several countries during the months of June through August. One of those place that we wanted to visit was East Berlin, Germany.

There was 4 of us in our group but I was the only one with a Diplomatic Passport and since the US Government had no formal relationships with the East Berlin Government, I could not cross over to East Berlin the typical way, through Checkpoint Charlie as most tourist do.

I had to take the subway and go underneath Checkpoint Charlie and the Security Officer advised us to always stay together, so the 4 of us agreed to use the subway. Once that was decided, the Security Officer told us how to hold our passport without letting go but if the guard was intent on pulling our passports out of our hands, that we were to take our passport and slam it down on the table and say, “I surrender my passport under protest and I demand to see a Russian.”

The idea with this move was to back them into a corner because the East Berlin Government had made all sorts of public announcement that they were not being controlled by the Russians and that there were no Russian governing in East Berlin.

The last order of business was to tell the Security Officer how long we were going to stay which was no more than 4 hours.

We left the embassy and made our way to the subway where we went down several flights of stairs, purchased our round trip tickets, waited for the subway, and finally boarded the next train. I cannot recall how long our actual train ride lasted but we passed several subway stations where the train did not stop. As we looked out the windows, we could see what appeared to be military personnel standing at the station holding automatic weapons and glaring intently at the passing train.

This was quite unnerving to all of us and we were uncertain of what might happen when we finally got to our station and had to disembark. Our wait did not last long after the last armed guarded empty station.

My 3 companions were ahead of me in line and breezed through without incident so I was feeling pretty confident.

When I got up to the table, I held out my passport as instructed, but the guard attempted several times to pull it out of my hand. I was sweating and very nervous, but stood my ground. Two other guards took their weapons off their shoulders and approached the table. The guard pulled at my passport again, at which time, I YANKED it our of his hand and SLAMMED it down on the table saying, I surrender my passport under protest and demand to see a Russian.

There was silence as I looked over at my 3 traveling companions who were standing there with their mouth's open and eyes wide as if they were deer in headlights.

A nice looking, older gentleman from the back approached and smiled at me and in perfect English questioned me, “Student?” To which I quickly responded, “Yes.”

He picked up my passport and quickly thumbed through it and asked, “How long are you and your friends planning to stay in East Berlin?”

He looked at me, down at the passport, back at me and then to my friends... then, just stood there for what appeared to be, as I recall, an endless amount of time, before handing me back my passport saying, “Good. Enjoy our city.”

My friends and I left the station as quick as we could and were actually amazed by what we saw when we finally got to street level.

There were no colors anywhere.

There were no people on the streets anywhere.

There were no vehicles of any kind anywhere.

We walked around for 2 hours and when we looked at our watches and realized that, we all thought we had been there 6 hours or more. There was nothing more for us to see and we took no photographs.

We decided to leave.

Our return trip was quick and pleasant in comparison and when we got back to street level in West Berlin, it was EXACTLY THE OPPOSITE of what we saw in East Berlin.

I don't remember much of my travels through Europe with my comrades but I have never forgotten my visit to East Berlin.
at 8:00 AM

Email ThisBlogThis!Share to TwitterShare to FacebookShare to Pinterest
Labels: My Life