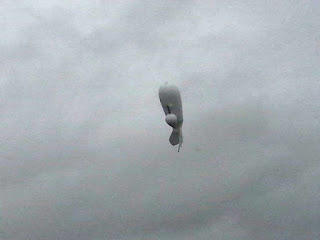 WASHINGTON — After a wild four-hour jaunt above parts of two states, a runaway military surveillance blimp crash-landed in rural Pennsylvania on Wednesday, ending a bizarre incident that raised concerns — and many smiles — across the Northeast.

Two F-16 fighter jets were scrambled from New Jersey to help monitor the giant blimp after it tore loose from a ground mooring at an Army base in northern Maryland and took to the windy skies, according to the Pentagon.

Before it crashed into a clump of trees, the rogue blimp had caused havoc in central Pennsylvania. PPL Electric Utilities said 20,000 people lost power after the airship's tether, a 6,700-foot-long cable that dangled below it, struck power lines as it floated by.

Officials worried that the blimp could drag its tether over a city or a power plant, or collide with an aircraft. But it steadily deflated as it rode the winds and was not shot down by the F-16s.

"It came down quite naturally as it began to lose helium," said Michael Kucharek, a North American Aerospace Defense Command spokesman. "We're hearing no reports of injuries. So we're grateful. It could have been a lot worse."

The blimp's tail detached near the end of its 150-mile journey and was found a quarter-mile away from the crash site in Moreland Township, according to NORAD.

Local and state law enforcement officers were on scene and a military recovery team from Aberdeen Proving Grounds in Maryland, where the blimp broke loose, was on its way, officials said.

Pennsylvania state police cordoned off the crash site to make sure none of the blimp's secret high-tech radar and electronics were stolen, according to a Homeland Security official, who wasn't authorized to speak on the matter.

Several federal agencies, including the Federal Aviation Administration, the Federal Emergency Management Agency and the Transportation Department, were involved in monitoring the wayward blimp. Read more:

Email ThisBlogThis!Share to TwitterShare to FacebookShare to Pinterest
Labels: Eastern US