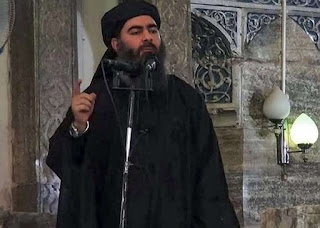 The condition and location of al-Baghdadi were not known, the military said.

It did not say when the strike occurred.

The military statement said al-Baghdadi, 44, had been heading to Karabla, near the Syrian border, to attend a meeting with ISIL commanders, Al Arabiya and other media outlets reported.

"The location of the meeting was also bombed and many of the group's leaders were killed and wounded," the statement said.

Iran's Fars news agency said several Arabic-language media outlets in Iraq have quoted "informed military sources" as saying al-Baghdadi had been killed and that no one in the convoy survived the attack.

Reuters, however, cited hospital officials and Karabla residents as saying al-Baghdadi was not among the dead.

Also Sunday, the Combined Joint Task Force that coordinates the international effort against the Islamic State said it had staged 24 airstrikes on ISIL in Syria and Iraq on Saturday.

The strikes conducted as part of Operation Inherent Resolve "further limits the group's ability to project terror and conduct operations," the task force said in a statement.

The Islamic State has taken control of a large swath of Iraq and Syria in brutal fighting.

Dominated by Sunni Arabs from Syria and Iraq, the group claims religious, political and military authority over Muslims worldwide as it attempts to build a state ruled by strict Sharia law.      Read More: