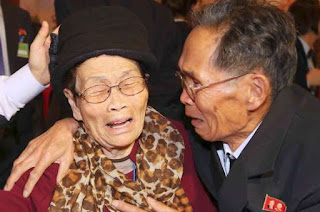 SEOUL, South Korea — A 98-year-old South Korean man cried loudly and repeatedly buried his face in a handkerchief as his elderly North Korean son, who last saw his father as a 5-year-old, watched calmly from across the table.

Meanwhile, an 88-year-old South Korean woman sobbed uncontrollably as she embraced her crying 64-year-old son, whom Seoul says was abducted by the North in 1972.

And two elderly North Korean women knelt and bowed to their 98-year-old South Korean father, who brought with him red, flower-patterned shoes he had promised his daughters 65 years ago.

Such scenes created a wave of emotions Saturday at North Korea's scenic Diamond Mountain resort, where the rival Koreas began the second and final round of reunions of families separated since the 1950-53 Korean War.

About 250 South Koreans, including more than 30 over the age of 90, arrived at the resort hours earlier for three-day meetings with 190 of their North Korean relatives most hadn't heard from for more than 60 years.

In the first round of reunions earlier in the week, about 390 South Koreans traveled to the resort to meet with 180 North Korean relatives.

For many participants from both countries, their first meeting after decades of separation will likely be their last, considering their age. Most of the South Koreans traveled to the North by bus on Saturday, but at least two were brought by ambulance because of their fragile health.

"I remember seeing you as a baby, but you are so old now," a sobbing Lee Seok-ju, 98, told his 70-year-old North Korean son, Ri Dong Wuk, whom he left behind in 1950 as he fled to the South to avoid being mobilized for the North Korean army.     Read more: