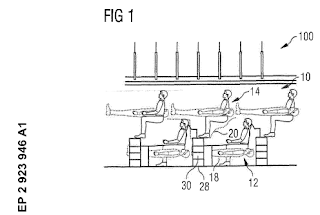 Airbus has filed a patent with the European Patent Office and US Patent and Trademark Office for a split-level mezzanine seating design that where passengers would be placed on top of one another.

In rows where passengers normally sit six across, the middle rows would alternate between the floor and a mezzanine level to squeeze in two more passengers per row, according to the news site Verge.

Passengers would access the elevated seats by a stair or ladder.

The design, which also lets the seats lie flat, would be used in business class seating, according to the News.com.au website in Australia.

Passengers have become more irate in recent years about giving up more space on planes as airlines try to fit in more passengers to boost revenue.

Just about a year ago, there were a series of fights about reclining seats and legroom on U.S.airlines, resulting in some diverted flights.

A consumer group has asked for a new Passenger Bill of Rights to set minimum airplane seat pitch standards via a petition fro FlersRights.org.

Seat pitch is the amount of space from a given point on one seat to the same point on the seat in front.

Over time, the seat pitch has shrunk in the economy class of passenger planes at many large airlines — also known as legroom.

However, there is no mention made as to where passenger might be putting their carry on bags or the ergonomics for stewards and stewardesses in handing meals and drinks to those higher up passengers or the potential accidents that may occur.

Email ThisBlogThis!Share to TwitterShare to FacebookShare to Pinterest
Labels: Airlines