BERLIN—Günter-Schabowski, the former East German Communist Party official who accidentally announced the opening of the border between East and West Berlin when responding to a reporter's question, has died. He was 86. 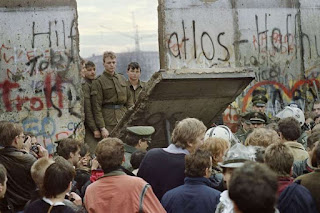 The reason for his death was not released but he had a number of strokes in recent years.
He also suffered from diabetes.

On the evening of Nov. 9, 1989 the date the Berlin Wall fell. Schabowski was answering a question about travel visas during a new conference broadcast live on television and radio when he slipped up and said restrictions on travel rules would ease "as far I know ... it is now ... immediately."

It later emerged that the decision to formally ease the travel rules was not supposed to come before the early morning of Nov. 10, but the early release of the information led to thousands of people swarming checkpoints and clambering over the Berlin Wall, a structure that had divided the city, and nations, since 1961.

When asked the question, Schabowski did not appear to know the answer at first and looked down at a script in front of him.

After hesitating, Schabowski said, according to a translation by Deutsche Welle, a German news agency and broadcaster:

"Therefore... um... we have decided today... um... to implement a regulation that allows every citizen of the German Democratic Republic... um... to... um... leave East Germany through any of the border crossings."