According to TrishaThadani of USA Today, A gigantic ice cloud spotted on Titan, one of Saturn's moons, means its southern winter will be even stronger than initially predicted, according to NASA. 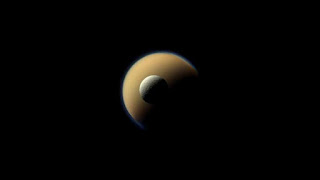 NASA's Cassini spacecraft recently discovered the "monstrous" new ice cloud in Titan's stratosphere, which is the stable area above the moon's active weather layer, according to a NASA press release.

While the past New England winter was thought to be rough, it was nothing compared to Titan's winter season, which lasts about 7 1/2 calendar years.

Researchers said the ice cloud will make the season even more intense.

Scientists discovered a large ice cloud in 2012, but it was "just the tip of the iceberg" compared to this new cloud, the release said.

The new cloud hovers over Titan's southern atmosphere at 124 miles, nearly 60 miles lower than the cloud discovered in 2012.

Scientists detected the ice cloud with using Cassini's Composite Infrared Spectrometer, which obtains profiles of the atmosphere at invisible thermal wavelengths, according to the statement.

“When we looked at the infrared data, this ice cloud stood out like nothing we’ve ever seen before,” Carrie Anderson, of NASA’s Goddard Space Flight Center, said in the statement. “It practically smacked us in the face.”

With a thick, nitrogen-dominated atmosphere, Titan is the only world in the solar system — other than Earth —known to have stable liquid on its surface, according to Discovery.

However, its seas are composed of ethane and methane rather than water.

Although any organisms on Titan would have evolved quite differently that those that evolved on Earth, scientists see Titan as one of the most likely places in our solar system to host alien life, according to Discovery.

"I was so excited, I pretty much fell out of my chair," Anderson said, while presenting the results at a news briefing earlier this month.