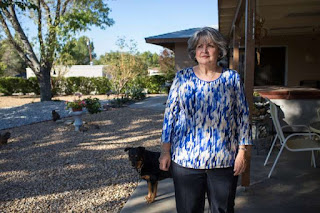 APPLE VALLEY, Calif. — Outside her two-story tract home in this working-class town, Debbie Alberts (above), a part-time food service worker, has torn out most of the lawn.
She has given up daily showers and cut her family’s water use nearly in half, to just 178 gallons per person each day.
A little more than 100 miles west, a resident of the fashionable Los Angeles hills has been labeled “the Wet Prince of Bel Air” after drinking up more than 30,000 gallons of water each day — the equivalent of 400 toilet flushes each hour with two showers running constantly, with enough water left over to keep the lawn perfectly green.

Ms. Alberts was the only one of them that has been fined for excessive water use.

Four years into the worst drought in California’s recorded history, the contrast between the strict enforcement on Californians struggling to conserve and the unchecked profligacy in places like Bel Air has unleashed anger and indignation — among both the recipients of the fines, who feel helpless to avoid them, and other Californians who see the biggest water hogs getting off scot-free.

This wide disparity in enforcement is testimony to California’s vast and chaotic system for moving water from reservoirs and underground systems to homes. There are 411 separate water districts — some public, some private — and each of these local utilities has been charged with devising its own rules for saving water during the drought.

All of the districts are grappling with a mandatory order from the State of California to reduce water consumption by up to 36 percent. The contrasting approaches taken by Apple Valley and Los Angeles illustrate how differently communities are enforcing the order — some with lenience, others with punishments.

In Apple Valley, the private utility company that supplies water to most of this town in the high desert east of Los Angeles has been ordered to cut back 28 percent. The utility, Apple Valley Ranchos, responded by applying “drought surcharges” to households that exceed a standard monthly water allotment. Nearly a third of the 20,000 customers have been assessed fines, which can run to hundreds of dollars.

Ms. Alberts, whose husband is disabled and not working, supports them and their two children on an income of about $22,000 a year. She received a surcharge of $79.66 on her last two-month water bill, raising the total above $330.

“It’s impossible to get under the line,” said Ms. Alberts, 58, whose property is about half an acre and was once surrounded by greenery. “We wash clothes once a week. We flush every third time. Sometimes we go to the laundromat because we’re afraid.”       Read more: