US Navy Flexes Its Muscles 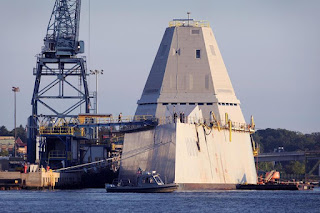 WASHINGTON — With sharp angles and sleek surfaces that evoke Hollywood science fiction, the Zumwalt-class guided-missile destroyer is the weirdest-looking warship produced in Maine since the Navy launched a low-slung oddity called the USS Katahdin 125 years ago.

Widely mocked, the Katahdin ended up being used for target practice.

USS Katahdin, a harbor-defense ram of innovative design, was the second ship of the United States Navy to be named for Mount Katahdin, a mountain peak in Maine.

The inspiration behind Katahdin was Rear Admiral Daniel Ammen, an advocate of a coast defense navy for years.

Ammen was impressed by the British torpedo ram HMS Polyphemus. Unlike Polyphemus, which was primarily a torpedo boat, with ramming a secondary function, the American design was for a pure ram, with no torpedoes carried.

Katahdin‍ 's design was a new departure in naval architecture, built to ride extremely low in the water with her bow awash while under way. Her hull embodied several new features later used in early submarines.
An order was placed for construction of a prototype armored ram in 1889.

Her keel was laid down by the Bath Iron Works of Bath, Maine in July 1891. She was launched on 4February, 1893, sponsored by Miss Una Soley, daughter of James R. Soley, the Assistant Secretary of the Navy, and commissioned at the New York Navy Yard on 20February 1897 with Commander Richard P. Leary in command.


Although Katahdin‍ 's engines were more powerful than specified, Katahdin failed to reach the contracted speed of 17 knots (31 km/h; 20 mph), requiring the passing of special legislation to allow her to be accepted by the navy.

Conditions aboard the ship were extremely uncomfortable, as it was cramped and had very poor ventilation, leading to almost intolerable temperatures being recorded.

The 600-foot Zumwalt — picture an Aztec pyramid welded atop a machete blade — is an infinitely more elaborate and costly ship, a futuristic showcase crammed with electronic innovations. But it, too, appears destined to fall well short of its promise.

After two decades on the drawing board and a tortured recent history, the $22 billion Zumwalt program is seen by numerous critics as a prime example of Pentagon budget bloat, delays, and misplaced priorities.

The Navy doomed the ship to sideline status when it slashed its order to just three of the vessels, from an original plan for 32. It disclosed that the warship would be vulnerable to enemy missiles and submarines. And it has publicly questioned the destroyer’s mission and usefulness.


Yet plans to build three of the pricey ships — at $4.3 billion each — went ahead anyway, as they always do here in the USA because unseen money always seems to buy the vote.


That price tag is 50 percent higher than the Navy projected a decade ago. It excludes another $9.1 billion spent in research and development on the overall project.

It tapers up to the deck instead of flaring out like a traditional ship, making it harder to detect on enemy radar but raising questions about its seaworthiness.

Critics say it could capsize in hurricane-force storms.

Now, the first of the three ships is 97 percent complete at Maine’s storied Bath Iron Works shipyard and nearly ready for sea trials, even as debate continues over what role it might play for the Navy.

Will the James Bond-style behemoth go down as another overpriced footnote in Navy history? Or could it, as its builders and Maine’s congressional delegation hope, provide the technological springboard for a Navy fleet of the future?       Read more:

Email ThisBlogThis!Share to TwitterShare to FacebookShare to Pinterest
Labels: US Navy