The shift to space and information warfare is part of a major military reorganization that has been underway in China for the past several years. It’s designed to transform the once ground forces-heavy PLA into a high-technology force. 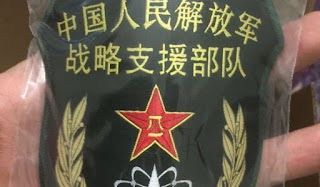 Military analysts say there has been no official announcement of the new space warfare unit; however, unofficial sources in China revealed the unit will be part of a new Strategic Support Forces service that will include nuclear missiles — currently under the Second Artillery Force — along with an electronic information forces, cyber warfare units and electronic and signals intelligence.

The shift to space and information warfare is part of a major military reorganization that has been underway in China for the past several years.

It’s designed to transform the once ground forces-heavy PLA into a high-technology force.

China conducted the sixth test of a hypersonic strike vehicle on Nov. 23, after having carried out an anti-satellite missile test on Oct. 30. Both weapons are part of China’s large-scale high-technology arms buildup.

A Chinese Internet military blogger posted photos of a purported flight test on Dec. 13 in northwestern China of what was described as either a missile defense interceptor test or anti-satellite missile test.

As reported by Inside the Ring on Oct. 15, the annual report of the U.S.-China Economic and Security Review Commission warned that “China is pursuing a broad and robust array of counterspace capabilities, which includes direct-ascent anti-satellite missiles, co-orbital anti-satellite systems, computer network operations, ground-based satellite jammers and directed energy weapons.”


“The Strategic Support Forces appear to have been inspired by the U.S. Strategic Command, which also controls missiles, space assets and cyberwarfare,” said Rick Fisher, a Chinese military affairs specialist. “It appears that the Space Force will control China’s military and commercial satellite program, its manned space program plus an increasing number of space combat programs.”

Mr. Fisher said there are increasing signs that China plans to send astronauts to land on the moon in the late 2020s to early 2030s, and the missions will include military capabilities.

Gen. Li currently is deputy chief of the PLA General Armaments Department and the manned space program, and is likely chief of the Xichang Satellite Launch Center, where the PLA has carried out early ASAT tests, perhaps including its first successful satellite interception on Jan. 11, 2007.

That missile test against a Chinese weather satellite created tens of thousands of pieces of space debris that still threaten both manned and unmanned space flights.