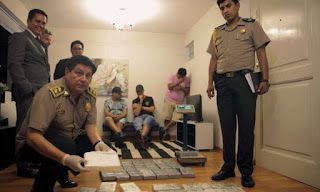 The hard-line drug policies adopted during the 1980s in the “war on drugs”, including mandatory minimum sentences for some drug-related crimes, has led to extremely high levels of incarceration in the country. The US has more than 2 million people in its jails – the second highest rate of incarceration per capita in the world – about half of whom were convicted of drugs-related crimes.

In the first half of the 20th century, doctors in the UK were allowed to prescribe drugs including morphine and cocaine to addicts – during this period there was a relatively low amount of drug use. In 1964, the UK introduced the first of several laws that would make it a criminal offense for individuals to possess drugs. The country now has, by some estimates, the highest level of dependent drug use in Europe – the number of dependent heroin users increased (pdf) from about 5,000 across the UK in 1975 to about 281,000 in England alone in 2007.

In the 1980s, Australia was one of the first countries to enact the policy of “harm minimisation”, which involves reducing supply of drugs, education policies that aim to cut demand, and minimising harm caused by drugs on the user and community, through initiatives such as needle programs and safe injecting sites. Despite this, a major international study warned in 2013 that Australia had “one of the world’s most serious drug problems”, particularly regarding opioid and cannabis use.

Portugal changed its drug laws in 2001, making possession for personal use an administrative rather than a criminal offense – punished by fines and community service rather than jail time. The policy is widely regarded as successful with decreased rate of HIV infections among drug users, a drop in deaths among heroin users, a dramatic increase in addicts seeking treatment, and no increase in drug use.

The second most liberal country in Europe regarding drug legalization. In 2009, the Czech government began allowing people to possess small quantities of marijuana and heroin without facing criminal charges. Production and trafficking of drugs, as well as possession of larger quantities, is illegal. Cannabis has been legally available for medical purposes since 2013.

Became the first country to legalize the use of cannabis by terminally ill patients in 2001. There have been strong campaigns around the country to legalize cannabis. In 2015, the Vancouver government introduced rules to license and regulate marijuana stores, to the consternation of federal government, though the newly elected Liberal prime minister, Justin Trudeau, ran on a drug platform which promised to “legalize, regulate and restrict access to marijuana”.


One of the world’s largest producers of coca leaf, Peru traditionally adopted policies of prohibition and punishment. However, changes to the criminal code, introduced in 2003, have relaxed this policy, making possession of drugs in small quantities for immediate use “not punishable”. This applies to cocaine, marijuana, opium and ecstasy. However, possession of two or more types of drugs is punishable, as is trafficking drugs.

Drug laws in Indonesia are notoriously strict. Possession of illicit drugs is punished by jail time and hefty fines and drug trafficking carries long jail sentences or the death penalty. The government has recently introduced provisions that allow people convicted of drug possession to go through rehabilitation rather than prison, in some cases.

The UAE has one of the world’s longest lists of prohibited substances. Possession of drugs commonly available in other countries – such as codeine and some antidepressants – can lead to criminal charges and a potential jail sentence. The UAE also enforces the death penalty in cases of drug trafficking. The presence of illegal drugs detected in blood or urine is considered possession and can lead to prison time, even in very small, trace amounts.

Iran has a very mixed drug policy. It mandates harsh penalties for possession, which can result in public lashing, and for drug trafficking. Approximately 70% of all executions in the country are for drug-related crimes. But the country, which has one of the highest drug addiction rates in the world, has received praise for progressive policies relating to treating addiction, including government-supported clean needle programs.