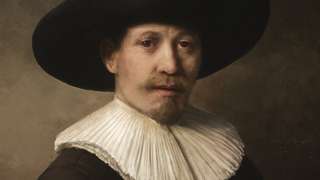 A team of technologists working with Microsoft and others have produced a 3D-printed painting in the style of Dutch master Rembrandt.

The portrait was created after existing works by the artist were analyzed by a computer.

A new work was then designed to look as much like a Rembrandt as possible - while remaining an original portrait.

It was then 3D-printed to give it the same texture as an oil painting.

"We really wanted to understand what makes a face look like a Rembrandt," Emmanuel Flores, director of technology for the project, told the BBC.

After they had been digitally tagged by humans, data on Rembrandt's paintings was gathered by computers which discovered patterns in how the Dutch master would, for example, characteristically shape a subject's eyes in his portraits.

Then, machine-learning algorithms were developed which could output a new portrait mirroring Rembrandt's style.

To limit the many possible results to a specific type of individual, the computer was asked to produce a portrait of a Caucasian male between the ages of 30 and 40, with facial hair, wearing black clothes with a white collar and a hat, facing to the right.

"We found that with certain variations in the algorithm, for example, the hair might be distributed in different ways," explained Mr Flores.

But humans didn't decide the final look and feel of the final portrait - they simply chose algorithms based on their efficiency and let the computer come up with the finished result.

Finally, a 3D texture for the painting was applied based on the height and depth of paint applied to Rembrandt's works.

As this was 3D-printed, artists' brushstrokes themselves could be mimicked in the final product.

"Our goal was to make a machine that works like Rembrandt," said Mr Flores. "We will understand better what makes a masterpiece a masterpiece."

However, he added, "I don't think we can substitute Rembrandt - Rembrandt is unique."

The two-year project, entitled "The Next Rembrandt", was a collaboration between Microsoft, financial firm ING, Delft University of Technology and two Dutch art museums - Mauritshuis and Rembrandthuis.

A public exhibition of the portrait is planned and details of the display will be released at a later date.