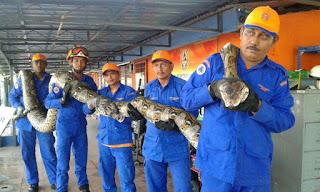 A huge python found on a construction site in Malaysia could take the record for the longest snake ever to be caught with initial estimates at eight meters.

The reticulated python – a species found in south-east Asia and widely considered as the longest reptile species – was spotted where a flyover was being built in Paya Terubong, a district on the island and tourist haven of Penang.

Herme Herisyam from Malaysia’s civil defence force, the department that caught the snake, told the Guardian that workers from the construction site called the emergency services on Thursday and authorities took 30 minutes to trap the snake.

“It is eight metres in length and weighs about 250kg,” he said by phone.

The Guinness Book of World Records gives the honor of longest snake ever in captivity to Medusa, also a reticulated python, who lives in Missouri, US. She was measured at 7.67 meters in the 2011 edition and still holds the title.


The longest snake - ever (captivity) is Medusa, a reticulated python (python reticulatus), and is owned by Full Moon Productions Inc. in Kansas City, Missouri, USA. When measured on 12 October 2011, she was found to be 7.67 m (25 ft 2 in) long. Medusa also holds the current 'Longest Snake - Living (captivity)' title.
In Kansas City, Missouri, USA, those who look directly at Medusa may not do that – but they certainly come to a stone cold stop.

That’s because the Medusa you find at the city’s Full Moon Productions isn’t some mythological figure of yore. It’s the longest snake ever in captivity.

Medusa, who is kept on show at “The Edge of Hell Haunted House” in Kansas City, could now lose her title. That python’s length would have to be first verified by the Guinness World Records body.

Before Medusa took the title, the previous record holder for longest snake in captivity was Fluffy, a 7.3m python who died in 2010 at 18 years old.

Reticulated pythons, who have a grid pattern on their skin that gives them their name, are normally three to six meters long and can be found in water.

Longer snakes could be living in the wild. In 1912, a python found and shot in Indonesia was reportedly 10 meters long.

Email ThisBlogThis!Share to TwitterShare to FacebookShare to Pinterest
Labels: Malaysia