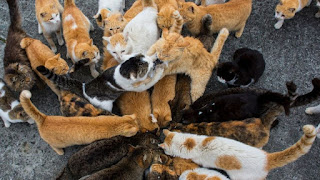 A politician in Rome is letting out 500,000 cats out of the bag and into the streets.

Razzi claims “time is running out” to battle the “rat invasion,” the media outlet reports. "Every day there are more and more."

The cats would be imported from Asia and be deployed in strategic areas throughout Rome to target the rodents.

While the cats would get free reign of the city streets, Razzi assures there’s little risk of a feral feline takeover.

In fact, the politician has a heartwarming and cost-effective proposition to keep the cats in check.

"They could live with Rome's lovely old cat ladies.

We could even offer a subsidiary for taking them in," Razzi said.

Rome has been a hub for cats since ancient times, but the population has fallen dramatically over the past three decades following a neutering policy for the city’s feral cats and dogs.

Since the law’s enactment, Rome’s rat population has skyrocketed. Experts now estimate there are more than two rats for each of the city’s 2.6 million residents.


But,
this is not as unusual as it seems,
because
it was also done about 5 years ago
in Chicago...

A North Side Chicago neighborhood is putting area feral cats to work battling its rat problem.

CBS Chicago reports that Chicago’s 47th Ward is working on a pilot program with the Tree House Humane Society where neutered, vaccinated and microchipped feral cats are being sent back out to the streets to try and deter pesky rodents.

Jenny Schlueter, the shelter’s development director, explained to the station that the “Working Cats” program is an alternative to the city spreading ineffective — and expensive — rat poison. Instead, the presence — specifically, the odor — alone of a cat can help scare away rats.

If successful, the program could expand to other parts of the city.

A similar program was previously instituted in Los Angeles to help not only to help deter rats, but also to save the homeless cats’ lives.

The program is facilitated by the Voices for the Animals Foundation.

Some groups, such as People for the Ethical Treatment of Animals (PETA), have criticized such programs, the Washington Post reports.

Email ThisBlogThis!Share to TwitterShare to FacebookShare to Pinterest
Labels: Italy