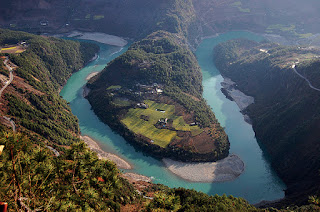 A’eyaku, China — In a remote corner of southwestern China, close to the Myanmar border, the towering Nu River gorge narrows to a frothy boil of rushing water, its powerful flow creating swirling eddies.

Thrown across the river from one rock face to the other hangs a flimsy suspension bridge.

“No entrance” reads a sign on its locked and rusting gate. “For construction only.”

The abandoned bridge is the sole hint here of a lengthy environmental battle that may be nearing its end.

For more than a decade, activists have fought a state-owned hydropower company’s plans to build giant dams on the Nu, the last natural river in China. Now, dam opponents say they scent victory.

Authorities are spooked by geologists’ warnings of earthquake risks near proposed sites.

And in what may be a change of heart, China’s top leaders are sending new signals of respect for the environment.


“It is clear this government has more environmental caution” than its predecessors, says Ma Jun, a veteran ecology warrior in Beijing, citing recent heightened efforts to curb air pollution and carbon emissions.

“It is paying more attention to environmental protection.”

That might just be enough to save the Nu, China’s only undammed river, which flows through a UNESCO-designated World Heritage site in the province of Yunnan.

The United Nations body describes the region as “the area of richest biodiversity in China and maybe the most biologically diverse temperate region on earth,” home to animals such as the rare red panda and birds like the white-speckled laughing thrush.

Neither the government nor the prospective dam builder, the electricity giant Huadian, has yet published any environmental impact assessment, as they are obliged to by law.

But if the project goes ahead, “it will destroy the river ecology,” argues Yu Xiaogang, head of Green Watershed, an activist group that opposes the dam and is based in Kunming, the provincial capital of Yunnan.

“It will not be good for us,” agrees Xiong Xiangnan, a young farmer sitting by the side of the road hoping to sell visitors a plump trout that he netted overnight.

“Dams will pollute the river and hurt the fish.”

Building reservoirs behind the dams, he adds, means that “we will lose our farmland and our terraces,” which are a source of sustenance for many local people.