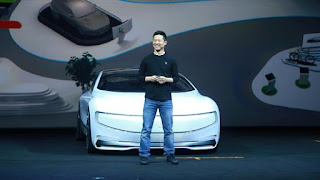 Jia is chief executive and chairman of Chinese conglomerate LeEco (formerly LeTV), which is best known for being the "Netflix of China," but has a product range that includes smartphones, televisions, mountain bikes and, most recently, electric vehicles.

Speaking at a meeting of the China Entrepreneur Club, an exclusive summit of business leaders, 43-year old Jia explained why foreign rivals did not worry him, particularly Apple, which is also expanding its ecosystem beyond consumer technology to driverless cars.

"We think the difference between us and Apple is very large. Apple is a mobile phone company focused on hardware and software," Jia said at the weekend event in Jinan. "LeShi [another name for LeEco] is focused on the internet first, and only then on software, and finally on hardware."

"Apple only has individual apps. This was the right choice during the first generation of mobile net, when CPUs [central processing units] and the mobile network speeds were not fast enough," Jia said. "However now we're moving into the next era of mobile internet, these problems no longer exist.

Moreover, having separate apps just means great obstacles in the user experience. We hope to break down these obstacles."

"One of the most important reasons [for slowing sales] is that Apple's innovation has become extremely slow," he said. "For example, a month ago Apple launched the iPhone SE. From an industry insider's perspective, this is a product with a very low level of technology...We think this is something they just shouldn't have done."

But there's a possibility that the lower-priced iPhone SE could pressure Apple's margins, if its effort to attract customers in emerging markets means fewer sales of high-end products.