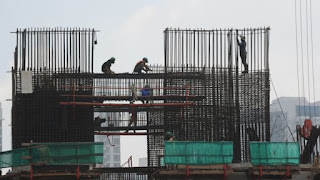 The risks to global financial stability have increased according to the International Monetary Fund.

The IMF says in a new report that the deterioration in developed countries is partly due to setbacks to economic growth.

In a separate report, the IMF also warns that government finances have deteriorated.

It says the risks to government finances are "rising almost everywhere".

The reports follow a wider warning on Tuesday from the IMF about the general global economic outlook.

That downgraded the agency's global growth forecasts and said the world economy was now more vulnerable to adverse shocks.

This new warning specifically about financial stability is partly due to that downbeat economic assessment.

Those same factors are also a danger for government finances in the rich countries.

Higher inflation is often helpful for debtors, governments and others because over time it erodes the real, inflation adjusted value of those debts.

The thrust of these reports on stability and government finances is one of rising risks, rather than imminent crisis.

As the IMF's managing director Christine Lagarde has put it "we are on alert, not alarm".

The financial stability report says there is "growing concern about a mutually reinforcing dynamic of weak growth and low inflation that could produce sustained economic and financial weakness".

The IMF is also concerned that in some countries inflation is too low.

Uncertainty about China's economic performance is also a factor.

The IMF says if the outlook for economic growth and inflation were to deteriorate further there would be an increased risk of a loss of confidence and renewed bouts of financial market volatility (something the world experienced earlier this year).

Borrowing costs could then rise, especially for debtors perceived as more at risk of default.

Email ThisBlogThis!Share to TwitterShare to FacebookShare to Pinterest
Labels: IMF