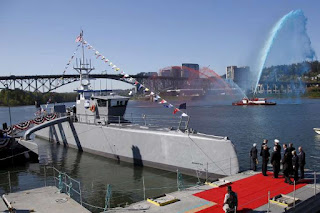 The US Navy's newest prototype uses radar, sonar, and global positioning systems to navigate without direction from a human captain.
Autonomous vehicles are becoming more common by the day, and just like drones changed the future of air warfare, new autonomous ships could change the way that navies approach the sea.


The Pentagon recently debuted the latest in military technology, showcasing a 132-foot-long ship with mine-hunting capabilities and the ability to travel up to 10,000 miles per jaunt.

"This is an inflection point," Deputy US Defense Secretary Robert Work told the Associated Press. "This is the first time we've ever had a totally robotic, trans-oceanic-capable ship."

The ship, called the Sea Hunter, is able to operate on its own, using modern technology such as radar, sonar, and global positioning systems to navigate.

Sea Hunter will be able to cut through the waves at speeds of up to 30 miles per hour.

The ship cost $120 million to develop, although engineers say each ship would likely cost around $20 million to produce.
"You now have an asset at a fraction of the cost of a manned platform," said Rear Admiral Robert Girrier, who directs the Navy's unmanned warfare systems program.

Although the Sea Hunter will eventually be an autonomous craft, it will remain in its testing phase over the next two years.

That means that the Defense Advanced Research Projects Agency (DARPA) will be testing the ship's capabilities, initially with human personnel aboard, along the coast near San Diego for some time yet.

Military personnel are excited about the Sea Hunter due to its ability to take humans out of the line of fire.

Despite interest at the corporate level, the International Transport Workers' Federation, which represents over half a million ocean-going transport workers, says that autonomous ships will never truly replicate the skill of a human captain.

Others have expressed concerns about cybersecurity and the possibility of hackers gaining control of the ship.

According to military experts, the US interest in naval innovation is driven by competition from other countries that are also innovating the field of marine technology.

Email ThisBlogThis!Share to TwitterShare to FacebookShare to Pinterest
Labels: US Navy