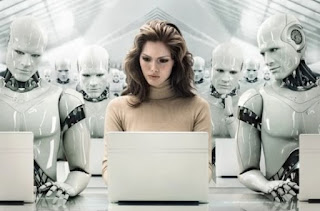 It is hard to miss the warnings.

In the race to make computers more intelligent than us, humanity will summon a demon, bring forth the end of days, and code itself into oblivion.

It’s too clever for our own good.

The doomsday story of an evil AI has been told a thousand times.

But behind the apocalyptic words of Stephen Hawking, the Oxford philosopher Nick Bostrom, and Elon Musk – who compared AI to nukes even as he launched an AI company – lies a more numbing existential threat.

Never mind death by clever clogs robot. Our fate is worse: to be eternally useless.

At least that is the future feared by Yuval Noah Harari. A lecturer at the Hebrew University in Jerusalem, Harari rose to prominence when his 2014 book, Sapiens: A Brief History of Humankind, became an international bestseller.

Two years on the book is still being talked about. Bill Gates asked Melinda to read it on spring break.

“It would spark great conversations around the dinner table,” he told her.

We know because he said so on his blog this week.

When a book is a hit, the publisher wants more.

And so Harari has been busy. His next title, Homo Deus: A Brief History of Tomorrow, is not out until September, but early copies have begun to circulate.

Its cover states simply: “What made us Sapiens will make us gods”. It follows on from where Sapiens ends, in a provocative, and certainly speculative, gallup through the hopes and dreams that will shape the future of the species.

And the nightmares, too. Because even as the book has humans gaining godlike powers, that is only one eventuality Harari explores.

It might all go pear-shaped, of course: we sapiens have a knack for hashing things up.

Instead of morphing into omnipotent, all-knowing masters of the universe, the human mob might end up jobless and aimless, whiling away our days off our nuts on drugs, with VR headsets strapped to our faces.

Welcome to the next revolution.

Harari calls it “the rise of the useless class” and ranks it one of the direst threats of the 21st century.

In a nutshell, as artificial intelligence gets smarter and smarter, more and more humans are pushed out of the job market.

Before you know it, billions of people are useless, not through chance, but by definition.

Email ThisBlogThis!Share to TwitterShare to FacebookShare to Pinterest
Labels: Robots versus Humans