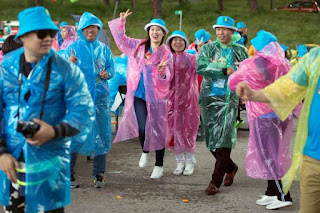 Staff at a Chinese mail order firm are enjoying a holiday in Spain at the expense of their boss, Li Jinyuan, the billionaire owner of direct-sales firm Tiens Group.

During their trip, which included visits to Madrid and Barcelona, workers were also able to take in a “bloodless” bullfight as well as being treated to a flamenco display, the Guardian reported.

It is not even the biggest mass holiday China’s 33rd richest person has booked for his staff. Last year he sent more than 6,400 workers on a trip to France in what was believed to be the country’s largest ever tour group.

That entailed booking 140 hotels in Paris and over 4,700 rooms in Cannes and Monaco.

Even that pales into insignificance compared with the holiday given to 12,700 workers at Infinitus China, who were sent to Thailand and feasted at a number of banquets at Pattaya, a seaside town.

The mass holidays are further evidence of the growing power of the Chinese economy, even though there are signs that it has been slowing down.

But, here is what is really interesting is that the USA, my country, has made the claim over and over again, how well they take care of their employees... and, one of the top companies that makes this claim is Google... what Google does for its employees does not even come close to what this Chinese company did for its employees.

When companies take care of their employees, those employees will work their butts off for their employer out of gratitude and respect... I think the USA has not only missed the boat but does not really practice what it tries to preach... if fact, our Unions were started because Management did not want to take care of its workers.

I am not saying that we should all move to China, but I think that our businessmen and women should look at their employees as something very valuable rather than just pawns that are used to do something for them.
at 2:00 PM